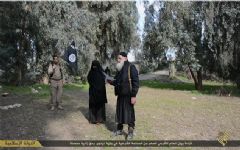 Islamic State militants in Iraq on Tuesday publicly stoned a man and woman to death on charges of adultery, parading the victims in a public square in the northern city of Mosul, according to witnesses and an Iraqi military official.

Later in the day, the militants publicly beheaded three young men on a street in central Mosul, accusing them of being the nephews of a political opponent of the Islamic State, also known as ISIS or ISIL.

They were the latest in a series of public executions of people accused of social offenses in the city, which the militants wrested from Iraqi control last June.

The stoning victims, who were not identified, were in their 20s, witnesses said. The woman was described as being married. It was not known whether they had been given a trial, but none was held in public.

Abu Mohammad al-Lahibi, who runs a clothing store in Mosul, said he had seen the militants gathering several hundred residents in front of the government building in Mosul to witness the execution. The couple were handcuffed, and the woman was wearing a niqab, or full face veil.

"Twelve ISIS militants were standing there who had bags with them filled with stones, and they began throwing the stones at them, and after the third stone the woman was killed," Mr. Lahibi said. The man died a short while later, he said.

Another witness said he had tried to record video of the execution on his cellphone but was ordered by the militants not to do so.

"I was moved by the crying of this woman, who started bleeding and then died from the stoning," said the witness, Saad, who gave only his first name out of concern for his safety. "I was standing there helpless. The government has left us as captives in the hands of ISIS, who make all kinds of crimes in the city. The more I see their crimes, the more I hate them and realize they have come to carry out a paid agenda to destroy the city and its history and civilization and to defame the image of Islam."

As she concluded a three-day trip to Iraq on Tuesday, Catherine Russell, the Obama administration's ambassador on women's issues, said in a telephone interview: "It is truly horrifying. ISIL is just trying to suppress and subjugate women and doing so through sheer brutality and terror."

Ms. Russell related being told by women's representatives from Mosul that the militants went door to door "looking for girls to marry and boys to be fighters."

The stoning was confirmed by an Iraqi military officer, Col. Ahmed al-Jiboori, who is stationed at the Nineveh Liberation Camp east of Mosul. Colonel Jiboori also said that Kurdish pesh merga fighters in the area stopped an Islamic State attack east of the city, on Bashiqa Mountain, on Tuesday, killing 11 militants.

Local residents said there had been more than a dozen executions by stoning since the militants began the practice in Mosul in August.

The three men who were beheaded on Tuesday were described by witnesses as being in their late 20s. After a rumor got out that their uncle had met with the Kurdish leader Massoud Barzani, ISIS militants came to the uncle's home and took the three young men to a public street where they were killed.

Such attacks have led some Mosul residents to express urgency for an Iraqi government campaign to retake the city. But the progress of a pro-government offensive against ISIS has been slow, with the main force stuck around the city of Tikrit, south of Mosul, for four weeks. The government announced last week that it was on the verge of capturing Tikrit from the militants, but it more recently said that it was consolidating its forces around the city to minimize casualties, as the militants hold out in the center.

On March 12, Iraqi officials announced that they were within days of completely subduing Tikrit and were doing so without help from the American-led coalition. When that did not happen, however, some said the lack of coalition airstrikes was to blame. Lt. Gen. Abdul-Wahab al-Saadi, the Iraqi military commander in Salahuddin Province, said that he had requested coalition airstrikes but that they had not come. Earlier, American officials had said that Iraqi officials had not requested help.

On Sunday, Hadi al-Ameri, the head of Iraq's popular mobilization forces, as the Shiite-dominated militias are known, reacted contemptuously to such concerns. "Some of the weaklings in the army say that we need the Americans, but we say we do not need the Americans," he said.

In remarks on Tuesday, General Saadi said he wanted to see Iraqi airstrikes, but did not mention coalition ones.

"We are taking the necessary steps to protect our forces, and the tribes will hold the ground after we liberate the territory," he said on Iraqi television, explaining the delay in subduing Tikrit.