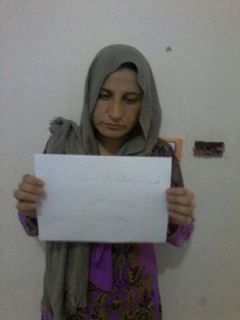 Disturbing images which have appeared online could be of three Assyrian Christian women ISIS abducted in February.

In three 'leaked' images shared on social media, the women hold pieces of paper on which their names and a date - July 27, 2015 - are written.

It is feared this means they will be sold to ISIS fighters if their families or charities do not pay ransom for their release, although no figure appears on the signs they hold.

On Tuesday, ISIS released 22 of more than 220 Christians they snatched from several Assyrian farming communities it raided in Iraq's north-eastern Hassakeh province, Syria, earlier this year.

The Assyrian Federation of Sweden has told MailOnline the women's surnames resemble those of families who lived in the region, although they cannot completely verify they are Christians.

It also said the theory of them being ransomed off to fund ISIS is plausible but, once again, difficult to confirm.

One woman stands over her young daughter holding a sign which reads Susan Elias along with the date July 27, 2015.

The second, who is alone, is called Hannaa Assaf Youssef. The third woman is surrounded by what appears to be her own three children but the writing on the sign could not be made out accurately.

'The names resemble the family names of people in a nearby village - Tel Jazire - so it is possible that these women could be from Assyrian villages but we cannot confirm that,' a source at the Assyrian Federation of Sweden said.

Regarding the women being ransomed, the Federation said: 'It is a theory and it makes sense but we can not 100 per cent say that this will happen.'

Their images have emerged at the same time as a suspected ISIS video, thought to be filmed on July 17, which features eight kidnapped Assyrian men. Each one reads out his name and the village they were from.

The Assyrian Federation of Sweden, who translated the Arabic video for MailOnline, were certain these men were among more than 200 Assyrian Christians abducted by ISIS around the Khabur River region in February.

Its spokesman Afram Yakoub said: 'They state their names in the video and we have a list of the hostages so we can clearly see they are one of them.

'No ISIS fighter appears in the video but the last man clearly says we call on the international community to secure our release but he does not say anything about ransom.'

Their health and general appearance suggest, as ISIS have claimed, that they have not been harmed.

Islamic State fighters have abducted and sexually abused hundreds of women from northern Iraq's Yazidi community since it raided their villages last year.

But captured Christians and Jews have enjoyed more protection from the fighters because they regard them as 'People of the Book'.

The terror group may now have changed that stance, according to a recent New York Times interview with an abused Yazidi girl.

The vile ISIS fighter who raped the 12-year-old girl allegedly told her that 'what he was about to do was not a sin' because she 'practiced a religion other than Islam'.

ISIS also made clear in a 34-page manual released by its 'Research and Fatwa Department' that sex with Christians and Jews who were 'captured in battle' was also allowed.

Earlier this week, 22 of more than 220 Assyrian Christians were released. The Assyrian Federation of Sweden, which has followed the case, said it brings the total number of freed Assyrians to 45.

It claimed 14 of them were women and the freed hostages were taken to the Virgin Mary Church in the city of Hassakeh.

The Assyrian Human Rights Network said 14 of those released were women. The freed hostages were taken to the Virgin Mary Church in the city of Hassakeh, the network added.

The British-based Syrian Observatory for Human Rights said tribal leaders mediated the release of the 22, adding that money has been paid for the released group.

Only last week, ISIS kidnapped 230 Christians and Muslims in Syria, according to the Syrian Observatory for Human Rights who feared they were destined for death and slavery.

At least 60 of them are thought to be Christian and although nearly half were later released, the fate of the others is unknown.

The terrorists seized the town of Qaryatain after suicide bombers targeted army checkpoints at the entrance.

At least 45 women and 19 children were among the kidnapped while hundreds of others are thought to be missing.

Christians make up around ten per cent of Syria's pre-war population of 23million people.