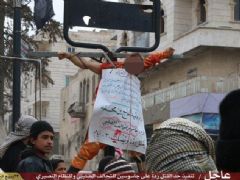 One of the crucified men.

Islamic State has publicly executed two alleged spies and mercilessly crucified another to a road sign in the Syrian city of Al-Bab.

Images have emerged showing two men - bound and dressed in orange jumpsuits - kneeling on the ground as hundreds of jeering insurgents surround them.

Masked men dressed in black have their weapons trained on the captives, while young boys force their way through the crowd to catch a glimpse of the helpless men.

Another picture shows a deceased man hanging from a post with a sign hanging around his neck. The onlookers in the photograph seem unphased by the man's limp, crucified body.

On Thursday, the extremist group announced it was holding an Israeli-Arab who posed as foreign a fighter to spy for the country's intelligence agency, Mossad.

Muhammad Musallam, 19, was quoted in Islamic State's online magazine Dabiq saying he joined the insurgents in Syria to report information about their weapons cashes, bases and recruits back to Israel.

His cover was blown when he phoned his father back in East Jerusalem, Dabiq claimed.

The Israeli government has denied he was working for them as a spy. So has his father Said who claims he was kidnapped after travelling to Turkey as a tourist.

Muhammad phoned home to say he had been abducted to neighbouring Syria and could not find a way to escape, his father said. Said Musallam claims his son needed '$200 or $300' before they would release him.

But before he could send the money, another man phoned to tell him Muhammad had escaped his captors and was seized by Islamic State. An Israeli security official said Mr Musallam travelled to Turkey on October 24 to fight alongside Islamic State soldiers in Syria.

He said: 'He went on his own initiative, without his family's knowledge.'

Asked whether his statement constituted a denial that Musallam was an Israeli spy, the official replied: 'You can understand it that way, yes.'

Ayoob Kara - an Israeli politician and former army officer close to Prime Minister Benjamin Netenyahu - said he was unaware of Musallam's case and did not believe he was a spy.

He claims several Arab men cross the boarder to aid refugees only to be kidnapped and exploited by Islamic State.

Israel has recently intensified its monitoring of would-be volunteers who might cross the border to join Islamic State and return to the country as battle-hardened extremists. Turkey is a popular holiday destination for Israeli-Arabs.

In November, the country jailed an Arab citizen who returned from Syria voluntarily having spent three months there with Islamic State.

In the first conviction of its kind, Ahmed Shurbaji was imprisoned for 22 months on the condition he cooperated with security services.