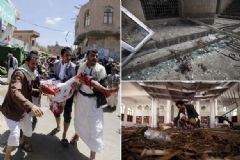 Scenes from the Yemen massacre

An Islamic State group says it carried out suicide attacks on two mosques in Yemen, killing 140 people and wounding 345 others.

Four suicide bombers, two at each mosque, struck in the capital Sanaa during midday Friday prayers, the most crowded time of the week.

The attacks were at the Badr and al-Hashoosh mosques, located across town from each other.

They are controlled by Shia rebels, known as Houthis, but are frequented by Sunni worshippers as well.

Witness Mohammed al-Ansi said: "The heads, legs and arms of the dead people were scattered on the floor of the mosque. Blood was running like a river."

Volunteers used blankets to carry away the victims, who included a small child.

The corpses were lined up and carried away in pick-up trucks.

At the Badr mosque, guards caught the first bomber and detonated his device outside the gates.

A second bomber then blew himself up inside.

A fifth suicide bomb attack on a mosque in the northern city of Saada, a Houthi stronghold, was foiled.

A Yemeni branch of Islamic State claimed it carried out the bombings.

An online statement described the attacks as a "blessed operation" against the "dens of the Shiites".

The claim was posted on the same website on which an IS group in Libya said it carried out Wednesday's attack on the Bardo museum in Tunisia.