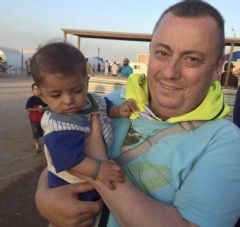 Islamic State militants on Friday claimed the beheading of a British aid worker and suggested an American hostage may be killed next, in what they said was retaliation for the U.S.-led campaign against the group.

The killing of Alan Henning would be the fourth beheading of a Western hostage by the jihadist group, beginning with the killing of American journalist James Foley in August.

The militants, also known as ISIL, made their announcement in a gruesome one-minute video released Friday, according to the SITE Intelligence Group, a research group that monitors jihadist websites. (Update: David Cameron Vows to 'Hunt Down' Alan Henning's Killers) The video came days after Britain's Parliament authorized military action against Islamic State, followed by the Royal Air Force's participation in the U.S.-led fight against the extremist group.

The U.K. Foreign Office said it was trying to confirm the video's veracity, while British Prime Minister David Cameron said "the brutal murder of Alan Henning by ISIL shows just how barbaric and repulsive these terrorists are."

Mr. Cameron said Mr. Henning's killing was particularly barbaric because he was aiding people of all faiths in Syria. "We will do all we can to hunt down these murderers and bring them to justice," Mr. Cameron said.

"Standing together with a broad coalition of allies and partners, we will continue taking decisive action to degrade and ultimately destroy ISIL," he said.

The video opens with a statement from Mr. Henning, dressed in an orange jumpsuit like previous hostages in Islamic State videos. "I am Alan Henning. Because of our Parliament's decision to attack the Islamic state, I, as a member of the British public, will now pay the price for that decision," he says.

In the video, a masked militant dressed in black says the beheading is in response to the U.K.'s decision to fight Islamic State in Iraq.

According to SITE, the militant sounds like the same man who appeared in an earlier video of the beheading of another British hostage, David Haines.

"The blood of David Haines was on your hands, Cameron," the militant says in Friday's video. "Alan Henning will also be slaughtered, but his blood is on the hands of the British Parliament."

The video shows the beginning of the beheading and then shifted to a shot with Mr. Henning's head resting on his back.

The group suggested an American aid worker, Peter Edward Kassig, a former U.S. Army Ranger, could be next.

Mr. Kassig, 26 years old, an Indiana native who served in the Iraq war, later worked in Lebanon as volunteer medical technical treating Palestinian refugees. He then founded an organization based in Gaziantep, Turkey, that provided humanitarian aid for refugees fleeing Syria's civil war. He was detained in October 2013, on his way to Deir Ezzour, Syria.

"Obama, you have started your aerial bombardment in Sham [Syria], which keeps on striking our people," the militant says. "So it is only right that we continue to strike the necks of your people."

Late Friday, the White House confirmed Mr. Kassig is being held by Islamic State militants, and spokeswoman Caitlin Hayden said they were still evaluating the video, but "at this point we have no reason to doubt the authenticity of the video released earlier today."

Members of Mr. Henning's family made several public appeals for his release. Mr. Henning left his job as a taxi driver in the U.K. to drive in a convoy to Syria to help deliver aid. He was taken prisoner in December. U.K. authorities had recently said they were doing everything they could to protect Mr. Henning but that they didn't know where he was being held.

Last week, mosques and civic groups from the northern British towns around Manchester, near where Mr. Henning was from, held a prayer vigil for his safe return.

British Muslims who organized the aid convoy in which the 47-year-old taxi driver participated in December also made individual, videotaped appeals to the Islamic militants who had threatened to kill him.

American lawmakers were quick to condemn the video.

Rep. Adam Schiff (D., Calif.), a member of the House intelligence committee called it "yet another terrible example of their barbarity-executing another courageous human being who was in the area to provide aid and assistance to refugees." He added, "This is not America's cause alone, nor the coalition's-but the imperative of all humanity to stand up to those who celebrate slaughter and mayhem."