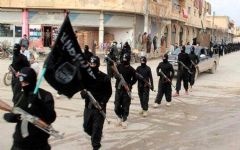 Islamic State Beheads Teenagers Accused of ‘Spying’ for the West

Islamic State militants have beheaded four teenage boys and young men in the Syrian city of Raqqa, accusing them of supplying information to the US-led coalition fighting the terror group.

The Syrian Observatory for Human Rights, a Britain-based monitoring group, said that Isil had accused the young men of "photographing sites and handing information to the crusader coalition causing bombing and the death of Muslims".

The report was confirmed by Raqqa is Being Slaughtered Silently (RBSS), a campaign group whose members risk their lives to smuggle news of Isil's atrocities to the outside world.

Raqqa, once a relatively liberal city, became Isil's de facto capital in 2014. Its residents are now subject to the group's brutal, sharia-inspired rule and beheadings are commonplace.

So are other punishments drawn from obscure Islamic teachings, such as a diktat suggesting that gay men are pushed from the tops of buildings.

Civilians inside the city say the harshest punishment is reserved for those alleged to have worked as so-called spies, supplying information to RBSS whistleblowers, or to the US-led coalition that now mounts near-daily bombing raids on the city.

As it nears its second year, the Western military campaign has started to squeeze the militant group, killing key officials and denting its multi-million pound finances.

Experts say Isil is now struggling to balance its budget, with cuts to fighters' salaries, price hikes on electricity and other basic services, and the introduction of new agricultural taxes.

After a string of military defeats, the group has also lost access to access points along the Syrian-Turkish border through which new recruits, foreign fighters and goods flowed into its territory.

But a critical 60-mile strip of land along that frontier remains under Isil control.

On Sunday, the US-led coalition reportedly struck an Isil explosives depot in the north Syrian town of Dabiq, after receiving intelligence from Ankara. At least two militants were believed to have been killed in the attack.