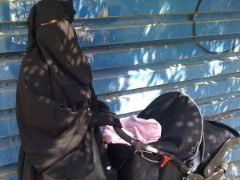 The UN on Tuesday decried numerous executions of civilians in Iraq by the Islamic State group, warning that educated women appeared to be especially at risk.

The jihadist group is showing a "monstrous disregard for human life" in the areas it controls in Iraq, the UN human rights office said.

The group, which controls large swaths of territory in Iraq and in neighboring war-ravaged Syria, last week published pictures of the "crucifixions" of two men accused of being bandits, and of a woman being stoned to death, allegedly for adultery.

She said "educated, professional women, particularly women who have run as candidates in elections for public office, seem to be particularly at risk."

"In just the first two weeks of this year, reports indicate that three female lawyers were executed," Shamdasani said.

A number of other groups are also targeted by the jihadists, Shamdasani said, pointing to "the ruthless murder of two men, who were thrown off the top of a building after having been accused of homosexual acts by a so-called court in Mosul."

Minorities are not the only ones suffering, with IS meting out "cruel and inhuman punishments" to anyone accused of violating its "extremist interpretations of Islamic Sharia law, or for suspected disloyalty," she said.

Four doctors were recently killed in central Mosul, allegedly after refusing to treat IS fighters. The group also reportedly executed 15 civilians in front of a large crowd in Fallujah on January 1, on suspicion they had cooperated with Iraqi security forces, and 14 more in a public square in Dour, north of Tikrit, for refusing to pledge allegiance to IS, Shamdasani said.