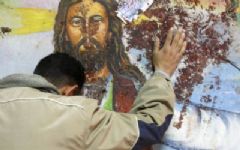 The destiny of 230 civilians of the displaced and people of the city of al- Qaryatayn kidnapped by "Islamic State" is still unknown, including dozens of Christians, 45 women, 19 children and 11 families, while hundreds others are missed. The reliable sources informed SOHR that IS kidnaped them according to name lists, and that some of them were arrested Dar Alyan monastery in the city of al- Qaryatayn, where unknown militiamen kidnapped the pontiff Jack Mrad, who is the head of monastery, was kidnapped from the monastery 10 weeks ago.

The clashes between the regime forces and allied militiamen against IS militants are still taking place between the city of al- Qaryatayn and town of Mahin in the southeast of Homs.

The regime forces opened fire after midnight an places in the Seventh Jazira and places in the neighborhood of al- Wa'er, no information about victims.