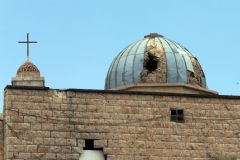 A view of the damaged church of Saint Sarkis and the Bacchus monastery in the ancient Christian town of Maalula, 56 kilometers northeast of Damascus (File photo)

Reports are emerging of the killing of Syrian Christians by Islamic State militants in the town of al-Qaryatain.

The town was retaken by Russian-backed Syrian forces and their allies earlier in the week.

Some 21 Christians were murdered when almost 300 Christians remained in the city after IS captured it last August, said the head of the Syrian Orthodox Church. They included three women, Patriarch Ignatius Aphrem II told the BBC.

He said some died whilst trying to escape while the others were killed for breaking the terms of their "dhimmi contracts", which require them to submit to the rule of Islam.

Five more Christians are still missing, believed dead. Negotiations and the payment of ransoms have seen the remainder of the group re-join their families.

The patriarch said warnings had come that Islamic State planned to sell Christian girls into slavery.

But despite the murders, he said restoring harmony among faiths remained his goal.

The town is now utterly devastated, with street after street and building after building - including a 1,500-year-old Catholic monastery - in ruins.

Coaches laid on by the Syrian government have been bringing thousands of residents back to al-Qaryatain and the nearby city of Palmyra.

IS captured al-Qaryatain in August, and abducted hundreds of residents, including dozens of Christians, many of whom were were ransomed by their families.

If the government reasserts its control over al-Qaryatain, it would be a further boost for President Bashar al-Assad, whose forces - backed by Russian air strikes - have made a string of gains against rebels in recent months.

The jihadists have suffered a series of setbacks in Syria in recent weeks, also losing the ancient city of Palmyra.

Al-Qaryatain, about 100km (60 miles) west of Palmyra, was taken over by IS fighters in their first major offensive since they seized Palmyra last May.

There has been a dramatic drop in fighting in Syria since a partial ceasefire came into effect last month, though IS and the al-Qaeda-linked Nusra Front were excluded and are still being targeted.