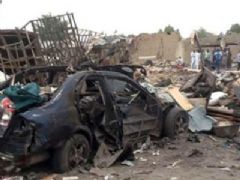 Wreckage where two explosions rocked Maiduguri's Gomaris district on the evening of March 1.

Islamist insurgents have killed at least 31 people in a village in northeast Nigeria, a lawmaker said on Monday, taking the death toll from three days of attacks to 116 as soldiers struggle to contain raging violence.

Insurgents have killed more than 400 people in just over a month, security sources say, making it one of the deadliest periods in the Islamist sect Boko Haram's insurgency, which began with an uprising in Borno state in 2009.

State senator Ahmed Zannah said 29 civilians died in the raid and two policemen were killed in a bomb blast on Monday while they were trying to remove bodies and question survivors about the initial attack.

Twin bomb blasts in Maiduguri killed at least 46 people on Saturday evening while, around 50 km away, dozens of gunmen were razing a farming village, shooting dead another 39, as Boko Haram increasingly focuses on the civilian population.

President Goodluck Jonathan launched an intensified military campaign almost a year ago to crush Boko Haram but the bloodshed has since escalated, albeit with violence largely contained in the sect's northeast stronghold.

Zannah said the military had abandoned their posts in Mafa, along with most of the women and children in the village, after the insurgents sent prior warning of the attack.

"All the soldiers in Mafa fled before the attack, maybe because they could not stand the superior weapons of the Boko Haram," Zannah told journalists, saying this was a common complaint aimed at soldiers by victims of attacks.

The military did not respond to requests for comment but has previously denied soldiers flee from combat.

Opponents of Christian southerner Jonathan are becoming increasingly critical of his failure to stem the violence in the majority Muslim north, where his main opponent in next year's presidential election will likely originate from.

Boko Haram has killed thousands in its attempt to create an Islamic state in a religiously mixed country of 170 million people. It is the biggest security threat in Africa's top oil exporter and continent's second largest economy.

Western governments are concerned about groups such as Boko Haram linking up with al Qaeda-linked cells in other countries in the Sahel region, such as Mali, where France sent troops a year ago to oust Islamist militants who had seized control.