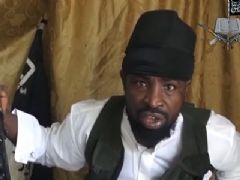 A screengrab taken on March 24 from a video shows a man claiming to be the leader of Boko Haram, Abubakar Shekau.

The Islamic insurgency Boko Haram in Nigeria killed 217 people during attacks on five villages Thursday and Friday, a ranking official said, the latest massacre in Nigeria's rural and inaccessible northeast.

Suspected fighters from the sect burned down four villages over two days, shooting 210 civilians as they ran from house to house, said Sen. Ahmed Zanna. In a fifth town, Dikwa, they burned down a teachers' college, killing seven, said Sen. Zanna, the leading legislator from Borno state, which is the epicenter of Boko Haram's war to impose Quranic law across Africa's biggest economy.

Spokespeople for the military and police didn't answer calls to their cellphones. The military would release a statement on the attacks later today, said an army official based in the capital, who wasn't authorized to be identified by name.

Mass killings of similar scale have become almost weekly events in war-troubled northeastern Nigeria. Often, word takes days to trickle out, hindered by the remoteness of the region's scattered villages. Many of those towns have been without cellphone reception for much of the past year as Nigeria's military shut down towers in an attempt to block Boko Haram's internal communications.

Though Boko Haram didn't immediately claim the attack, it fits a pattern in Nigeria's northeast: Increasingly, the sect is carrying out horrific reprisals against pro-government villages far removed from military protection.

"They're lashing out at people that don't support them," said Cambridge University Nigeria researcher Adam Higazi. "It's a serious problem."

"There are only two groups of people in the world: There are either those who are with us or against us," he said, flanked by rifle-toting gunmen. "This is my only focus now."