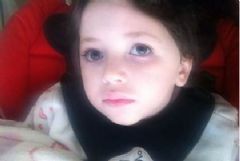 A 4-year-old Israeli girl who was critically injured in a car accident caused byPalestinian rock throwers two years ago died on Tuesday after a severe bout of pneumonia that relatives said was complicated by her neurological trauma.

The girl, Adele Biton, became a potent national symbol of the dangers that stones can cause after the March 2013 attack. Her family was driving home to the settlement of Yikar, in the Israeli-occupied West Bank, when a rock hit their car, causing the driver to lose control and crash into a truck. Haaretz, an Israeli news site, reported Tuesday night that five Palestinian teenagers charged in the attack were still on trial.

"This serves as a reminder to everyone in Israel that rocks can kill," Gershon Mesika, a leader of the West Bank settlers' movement, said on Israeli television.

Naftali Bennett, the economy minister, posted on Facebook a photo of himself with Adele and her mother, Adva, who was also injured in the attack, and wrote, "There are no words."