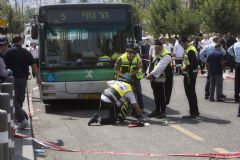 Magen David Adom said on Thursday that a Palestinian assailant stabbed an Israeli man on Bar Lev Street in Jerusalem, wounding him seriously.

Paramedics who rushed to the scene said that the Israeli, a 25-year-old male, suffered wounds to his upper body, though no other specifics were provided. The victim was rushed to Shaare Zedek Medical Center in Jerusalem for treatment.

The initial reports indicate that the incident occurred near the Israel Police national headquarters.

Police and security forces were on the scene to investigate. According to police, special forces on patrol nearby tackled the stabber and took him into custody.

The Shin Bet named the terrorist as Subhi Abu Khalifa, 19, a resident of the Shuafat Refugee Camp district. Abu Khalifa has no history of security arrests or offense. The Shin Bet has begun questioning him.

Police spokesman Micky Rosenfeld said the man was attacked shortly after 12 p.m. while walking in the area. His assailant was apprehended by police moments later.

Gadi Miller, a senior MDA paramedic who was the first to arrive at the scene, said he noticed a 25-year-old male "lying on the ground with stab wounds to his upper body."

"MDA paramedics who got to the scene administered life-saving treatment and he was rushed to hospital in serious condition," Miller said.

MDA said that it also treated a passerby who was lightly hurt after accosting the Palestinian stabber.

After a brief scuffle, the assailant managed to slip away. Police forces nearby gave chase on foot in an attempt to apprehend the suspect. After managing to track him down, they pinned him to the ground and took him into custody.

The stabbing is the fourth of its kind in the capital since October first and has resulted in heightened police security throughout flashpoint Arab neighborhoods and the Old City.

The wave of violence has killed two Jews and seriously wounded at least five others.

Two terrorists have been killed.