U.N. Inaction on Jordan
All Actions of the UN Human Rights System Critical of Specific States, 2007 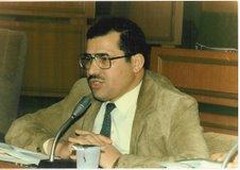 Dr. Ahmad Oweidi Al-Abbadi has been imprisoned in Jordan since May 2007 for writing e-mails decrying the government's alleged corruption and human rights violations.
Source: Free Oweidi

"For an hour Monday morning, Bisher Oweidi held back. The 23-year-old college student saw his imprisoned father, Ahmad, for the first time in months.

The 62-year-old scholar has been held on political charges inside Jordan's Jwaideh prison since early May. Considerably thinner, he appeared tired by interrogations and worn by the routines of prison life.

"I held back my tears," Bisher, who is studying for a business degree in Spain, said in an interview after the visit. "I didn't want him to see me cry. After I got out of the prison, I started to cry."

Ahmad Oweidi, author of dozens of books about Jordan and its tribal roots as well as a controversial political activist, never took up arms or organized rallies. His group, the Jordanian National Movement, met once a month in living rooms, talking politics over coffee.

As leader of the small party, he mostly wrote e-mails decrying alleged corruption and human rights violations in Jordan to officials and newspapers.

But in Jordan, amid a crackdown on political dissent throughout pro-American Arab countries, Oweidi became an enemy of the state. The former lawmaker has been charged with heading an illegal organization, harming the government's reputation and violating the country's e-mail laws.

"He's not a troublemaker," said his wife, Jamila Abbadi. "He likes democracy. He likes to talk. He expresses his ideas."

Oweidi is an unlikely dissident. A member of a tribe associated with Jordan's security forces, he attained the rank of police colonel as a young man. He also studied in Britain and Egypt and wrote poetry and articles for small newspapers. He served in parliament from 1989 to 1993 and from 1997 to 2003.

"While he was in parliament, he talked about corruption," his wife said. "When his enemies came to power, they began to settle scores with him."

His family says he has been denied university posts because of his politics. He earns most of his money writing screenplays for soap operas. He was once arrested and released on sexual-assault charges he says were trumped up to discredit him.

Despite Washington's close ties with the Jordanian regime, Oweidi has maintained cordial relations with the U.S. Embassy in Amman, his family says.

"He's not calling for an Islamic state," Bisher said. "He's not against the monarchy. He's against the corruption of the royal court."

Oweidi's defenders say an April letter he wrote to U.S. Senate Majority Leader Harry Reid (D-Nev.) sparked his arrest. He alleged corruption involving the Jordanian Ministry of Interior and the court of King Abdullah II. He posted the note on the website of his political party.

Oweidi was arrested shortly after 2 p.m. on May 3, according to his family. He has been subjected to interrogation by security forces and hauled before courts, including a military tribunal. He pleaded not guilty at a court hearing last week.

"This is the first time that someone has been arrested in Jordan because of what they posted online," Reporters Without Borders said in a statement. "Using imprisonment to silence a government opponent and to cover up embarrassing scandals is unacceptable."

Bisher and his younger brother have put up a website, www.freeoweidi.com, to drum up support for their father's release.

Ahmad Oweidi, a staunch Arab nationalist, defends the role of Jordan's dominant Sunni tribes, sometimes alienating the country's majority Palestinians as well as other opposition groups. But many have now come to his defense.

"We disagree with him severely, but we don't think he should be put in jail," said Zaki Bani Arshid, head of the Islamic Action Front Party, Jordan's leading Islamic political group.

Oweidi and his wife have five children, all of them in college. During Monday's prison visit, Oweidi handed his family hundreds of pages of screenplays to sell for his family's needs.

One daughter, 20-year-old Zahra, was scheduled to marry last month, but put off the wedding.

"For now, our lives have stopped," Bisher said."