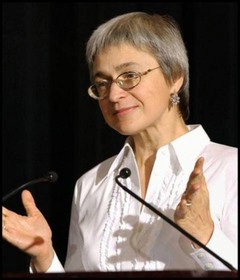 The Globe and Mail

"Once, Andrei Kalitin was part of a new breed of young, hot-shot Russian journalists, riding the wave of openness that washed over the country when the former Soviet Union collapsed.

... But times have changed for people and organizations charged with scrutinizing Russia's shaky democracy. Journalists are especially vulnerable.

Thirteen have been slain in contract-style killings in the past decade, according to the U.S.-based Committee to Protect Journalists.

And not one death has been solved.

Last month, Mr. Kalitin survived a shooting that might have made him No. 14.

On a rainy June evening, as he left his Moscow high-rise for the subway, a man approached him on the sidewalk, raised a revolver and fired.

Mr. Kalitin believes the shooting is connected to a book he wrote, to be published next month, alleging Mafia involvement in Russia's lucrative aluminum industry.

... Mr. Kalitin said critical reporting has all but disappeared in Russia under Mr. Putin, who took office in 2000. Beginning in 2001, when the state-controlled gas monopoly Gazprom took control of NTV, the last independent television network, Russia has gradually tightened controls on newspapers and broadcasting.

Even though freedom of speech is guaranteed in the Russian constitution, opposition parties and government critics have disappeared from the airwaves. Even media watchdog groups complain they have been harassed by authorities.

Nina Ognianova of the New York-based Committee to Protect Journalists said the string of unsolved assaults on reporters has weakened Russian journalism and she urged authorities to investigate the Kalitin shooting.

Ms. Ognianova said it's obvious Mr. Kalitin's book made him a target.

"Whenever someone follows the path of money, they get stopped," she said in a telephone interview from New York.

Last month, a Russian non-profit group that receives funding from the United States and other Western countries to train journalists was shut down by a criminal investigation.

Prosecutors alleged the group was laundering money after its leader was stopped by customs officials at the Moscow airport carrying about $2,500 (U.S.) more than the $10,000 permitted when entering the country.

Manana Aslamazyan, who was returning from France, said the transgression was an honest mistake, and told reporters that she expected a fine.

Instead, Ms. Aslamazyan faces five years in prison for smuggling. Officers from Russia's Interior Ministry raided her Moscow-based organization, accusing the group of money laundering and freezing its bank accounts.

Ms. Aslamazyan fled to Paris and the future of her group is unknown.

Mr. Kalitin said the repressive atmosphere in Russia has prompted journalists to censor themselves.

Reporters and the Russian public have entered a "don't-ask-don't-tell" pact, he said. Russians no longer have the same thirst for knowledge about their society, but journalists, too, have stopped scrutinizing their country like they did a decade ago, whether out of fear for their jobs - or their lives.

In the past, Mr. Kalitin said, authorities used to react to scandals revealed in the press. "Now, nothing happens. Whatever you do, whatever you write about, there is just silence." Mr. Kalitin himself probed the fatal shootings of two high-profile journalists: Forbes Russia editor Paul Klebnikov, an American, and newspaper reporter Anna Politkovskaya, a fierce critic of Russia's involvement in Chechnya.

Mr. Kalitin suspects police won't have any better luck with his case.

"Maybe they [the police] would like to investigate, [but] they knew they would never find the assailant."

... Police refused to open an attempted-murder investigation and called the attack an act of hooliganism.

"They wouldn't open a criminal case on a contract murder because I wasn't shot dead," he said.

Asked whether he is afraid, Mr. Kalitin replied: "I would be an idiot to say I'm not afraid . ... But I can't go anywhere. I must stay here."