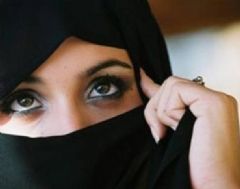 As per a new law in the Kingdom of Saudi Arabia, a ban has been imposed on 'tempting eyes of women.

According to the latest diktat, any women with 'alluring eyes' will have to wear a full veil.

Defending its decision, Sheikh Motlab al Nabet, spokesman of the Saudi Arabian Committee for the Promotion of Virtue and the Prevention of Vice, said that the government has the right to force women to cover their faces.

"The men of the committee will interfere to force women to cover their eyes, especially the tempting ones. We have the right to do so," the metro.co.uk quoted him as saying.

However, the government is yet to clarify the exact definition of the word 'alluring' and 'tempting'.

The committee has the backing of some of the most powerful members in the Royal Family and it is very likely that the current decree too would be followed to the tee.

Earlier this year, the Committee was awarded USD 53 million by King Abdullah.