U.N. Inaction on Kuwait
All Actions of the UN Human Rights System Critical of Specific States, 2015 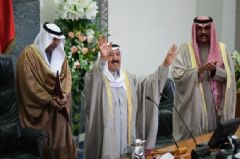 A Kuwaiti defense lawyer says an appeals court has upheld a ruling against a Twitter user and ordered him jailed for five years over comments he posted online deemed insulting to the ruler of the Gulf nation.

Attorney Fahad al-Harbi said Thursday that the court determined that Abdulaziz al-Mutairi had insulted the country's hereditary emir in comments made on the social media platform. He says the tweets were made in 2012.

Al-Harbi says his client will continue to contest the ruling through the courts.

Kuwait has the most freewheeling political scene among the oil-rich Gulf Arab states, but insulting the emir remains illegal. The country has brought charges against several people in recent years over social media posts deemed offensive by authorities.