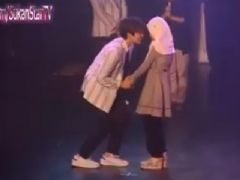 A group of Muslim girls in Malaysia were threatened with arrest Wednesday after a video emerged showing them hugging members of K-pop boy band B1A4, local media reported.

The incident has prompted a public outcry in the Muslim majority country, with Islamic conservatives denouncing both the popular Korean K-pop genre and the girls.

Official Muslim-purity enforcers have given the girls one week to turn themselves in or face arrest, local media reported.

In the video, the band members are shown bringing fans wearing Islamic headscarves up on stage during an event in Kuala Lumpur last weekend, crooning to them and cuddling them, with one band member kissing a fan on the forehead.

"This video shows how many of our (Muslim) girls are ignorant about our religion and do not know the boundaries..." said one Facebook user. "The girls should be punished," another said.

A local Islamic group is claiming K-pop is part of a Christian agenda to infiltrate and influence young Muslims.

Amid the controversy, a satirical cartoon with Malay language captions appeared on Facebook, glorifying women who joined Islamic militants in Syria but condemning female Muslim K-pop fans as degrading the religion. It had received more than 13,000 likes by Wednesday afternoon.

While many condemned the girls' actions, others felt authorities were overreacting.

Prominent human rights activist Ambiga Sreenevasan tweeted that if the girls were arrested, it would "traumatise them for the rest of their lives".

Organisers of the concert have apologised for the incident.

Despite the language barrier, scores of young Malaysian women and teenagers are ardent fans of heavily styled K-pop with its teen-idol groups, glossy hooks and meticulously choreographed dance moves.

Earlier in 2013, K-pop sensation Psy performed his 'Gangnam Style' megahit in Malaysia after being invited by prime minister Najib Razak's Barisan Nasional coalition, a move aimed at drumming up political support, according to some observers.