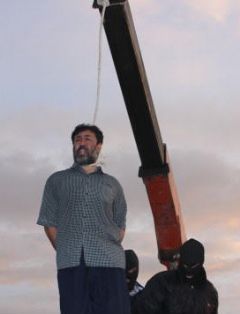 Two men were executed in Iran today. One of them was hanged publicly in central Iran four weeks after he was arrested.

The official Iranian news agency IRNA reported that a man was hanged in public early this morning in the town of Golpayegan (Central Iran). Several thousand people were gathered at the scene of the public executions. The man who was identified as Mansour Mirlouhi (43) was charged with Moharebeh (Waging war against God) and "Corruption on earth" for participation in several episodes of armed robbery and two armed clashes in Khomein and Golpayegan resulting in death of three security forces and two civilians, said the report.

According to the report Mirlouhi was arrested on 1. January 2015 and sentenced to death on January 24 by section one of Isfahan Revolution Court. His death sentence was approved by the Supreme Court two days later on January 26 and he was hanged publicly two days after that, on January 28.

Iran Human Rights (IHR) strongly condemns today's public execution and Mahmood Amiry-Moghaddam, the spokesperson og IHR said: " Beside the inhumane and degrading punishment of public execution, lack of due process is another serious violation of human rights in this case. The whole judicial process leading to the man's execution lasted less than four weeks. Unfortunately lack of due process is not uncommon in Iran".

The state run Iranian news agency Fars reported about another execution in Tehran today. The prisoner was identified as "Ali Kamalvand" and was sentenced to 74 lashes for stealing and three times execution for three rapes, said the report. The charges haven't been confirmed by independent sources.