U.N. Inaction on Malaysia
All Actions of the UN Human Rights System Critical of Specific States, 2009 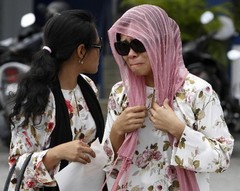 Muslim model Kartika Sari Dewi Shukarno, 32, right, who was to be caned for drinking beer, is comforted earlier today by her sister Ratna as she leaves the Kuala Kangsar police station in Malaysia.
Source of photo: AP

Model to be Caned for Drinking Beer in Malaysia

KUALA LUMPUR, Malaysia - A Muslim part-time model will be caned next week, becoming the first woman in Malaysia to be given the punishment under Islamic law, after she pleaded guilty to drinking beer, a prosecutor said Wednesday.

An Islamic court in July ordered that Kartika Sari Dewi Shukarno, 32, be lashed six times with a rattan cane after she was caught drinking alcohol in a raid on a hotel night club in eastern Pahang state last year.

Prosecutor Saiful Idham Sahimi said Kartika will be the first woman to be caned under Islamic law after she chose not to appeal the sentence.

"This is the first case in Malaysia. ... It is a good punishment because under Islamic law a person who drinks commits a serious offense," he said.

On Tuesday, the court set a one-week period starting next Monday for the sentence to be carried out in a woman's prison, Saiful said. It is up to prison authorities to decide when to cane her during that period.

He said Kartika will remain in prison during that time and will be released "as soon as possible" after the caning is carried out.

Saiful said the rattan cane to be used on Kartika would be lighter than the one used on men, and its purpose was to "educate" rather than punish.

Muslims, who make up about two-thirds of Malaysia's 28 million people, are governed by Islamic courts in all civilian and Islamic matters. Most alcohol offenders are fined, but the law also provides for a three-year prison term and caning.

Non-Muslims are governed by civil courts, which also impose caning for offenses such as rape and corruption. Women, children and men above 50 are exempt under civil law. Caning, administered on the buttocks, breaks the skin and leaves permanent scars.

Kartika said earlier that she wanted authorities to cane her soon so that she can resume her life with her husband and children. Some politicians and women's rights activists have criticized the penalty as too harsh.

A woman and a man, both Muslims, were also arrested during a series of raids in Cherating, a beach town in Pahang state, on the night when Kartika was detained. Both were also sentenced to caning, but they have appealed.

Malaysian clubs and lounges typically serve alcohol and are not legally required to check if customers are Muslims before serving them.