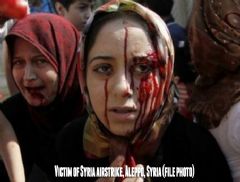 SOHR documented 11017 air raids carried out by the regime warplanes and explosive barrel bombs dropped by the helicopters on several areas in all over Syria from Idlib in the north to Daraa in the south and from al- Bokamal in the east to Lattakia mountain in the west since the beginning of this year until April 30.

On the other hand, SOHR also documented death of 1606 civilians, including 255 women and 369 children, due to aerial bombardment carried out by the regime warplanes and helicopters while about 13000 other civilians were wounded. The aerial bombardment also resulted in destroying people's public and private properties as well as it left huge material damages in several areas and displaced dozens of thousands of people.

The explosive barrels and air raids also resulted in the death of 708fighters from the Nusra Front, IS, rebel and Islamic battalions while other hundreds fighters were wounded.

SOHR renews its appeal to UN Security Council to assume its responsibilities and work on using its power in order to stop the daily killing committed against the Syrian people and destroying their social structure, coexistence, past, present and future by using all kind of weapons, whether they are firearms or media, where the Syria helicopters intensified and concentrated on using explosive barrels in the last six months Despite the adoption of resolution 2139 by the Security Council, where the most important mission of this resolution is to maintain the international peace and security.