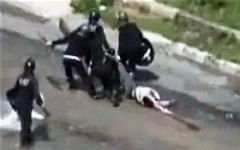 Source: Telegraph
Syrian security forces drag the body of an anti-government protester along a street in Deraa
Photo: REUTERS

More than 50 killed as protests spread to 25 Syrian towns

The pro-democracy, anti-Assad days of rage spread dramatically across Syria Friday, April 8, flaring in 25 cities and seriously shaking Bashar Assad's 11-year old grip on power for the first time since the movement began three weeks ago. At least 50 people were killed â 30 demonstrators and 20 security officers - and hundreds injured - many of them in the southern town of Daraa, the epicenter of the opposition movement.

There, around 100,000 protesters gathered from villages around the town and managed to drive Assad's security forces into retreat. Four Damascus suburbs were the scene of demonstrations as well as, for the first time, Tartous, Abu Kemal and Hamma. Kurdish cities were also aflame with protest.

Outbreaks in Hamma, where 29 years ago Bashar Assad's father put down an uprising by slaughtering 25,000 Sunnis, indicate that the Sunni population has crossed the fear threshold which kept it docile under Assad rule.

Until this Friday, the heads of Syrian Revolution 2011, the front established by opposition groups and the Muslim Brotherhood, instigated a campaign of passive resistance. They told the population, for example, to stop paying their electricity bills, an act of protest that has caught on in Syria's big cities. Furthermore, the important port-town of Latakia split down the middle between two opposing camps â the 300,000 members of the ruling Allawite sect fear to venture into the districts populated by the town's 400,000 Sunnis â and vice versa.

Army control was reduced to keeping open the road linking the Syria's main import and export port facilities to the highway out of the city.

The disturbances Friday did not reach the center of Damascus or Aleppo, a Sunni city of 2.8 million inhabitants which is Syria's economic hub. Major outbreaks there would drive a big crack in Assad's hold on power.

The Syrian ruler has poured substantial armed strength into the city, cutting its Internet links and arresting thousands of people suspected of opposition ties. But he faces a huge problem. He can't trust the Sunni rank and file to obey orders to suppress a large-scale Sunni insurrection in Aleppo - only the Alawite units which owe loyalty to the president and the Assad clan. He must therefore rely on the support of the 4th Army Division and the security and intelligence services and they may be too thin on the ground to shoulder the task. He dare not try and loose Sunni troops on the protesters of Aleppo for fear they join the protesters.