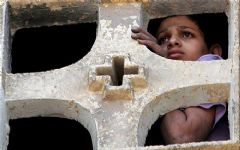 The riots, in Imbaba, a poor, densely populated district in the city, have heightened fears that a power vacuum following Hosni Mubarak's overthrow will lead to a power grab by Islamic fundamentalists, more sectarian strife and a collapse in law and order.

Following the meeting Abdel Aziz al-Gindi, the justice minister, said: "We will strike with an iron hand all those who seek to tamper with the nation's security." He promised to protect places of worship from attack.

The Supreme Council of the Armed Forces, which has ruled the country since Mr Mubarak's enforced resignation on February 11, announced the arrest of 190 people yesterday and said they would be tried before military tribunals.

Muslim protesters had tried to storm the St Mena's church in Imbaba on Saturday evening, claiming Christians were holding against her will a woman who had converted to Islam and married a Muslim.

Stones and firebombs flew over the heads of soldiers who had been deployed in the dusty, narrow street outside the church. Soldiers also scuffled with Coptic Christians who accused them of not doing enough to protect them after a fire bomb thrown from the Muslim side set fire to an apartment building next to the church.

The troops eventually advanced on the Muslim protesters, a mix of Imbaba residents and hardline Salafi fundamentalists, firing over their heads and forcing them to retreat down the street.

Inside the church, blood pooled on the floor as wounded Christians were rushed in for treatment. Near the altar, the parishioners had wrapped a corpse in a cloth and placed a bible on its chest.

Father Hermania, the church priest, said at least five Christians were killed in the clashes, which lasted into Sunday morning. The government later said 12 people, including at least four Christians and six Muslims, died in the violence. Soldiers unsuccessfully tried to persuade Christians standing guard outside the church gates to go inside, but they refused, chanting "Oh God! Oh Jesus." The Muslims chanted back: "There is no God but Allah."

They insisted that Christians had fired on them when they went to the church to negotiate the woman's release. The Copts denied they were holding any converts.

One of the Muslim protesters, dressed in the white knit skull cap and robes often worn by Salafi extremists, said they would be satisfied only when the church was searched for weapons and the alleged convert.

"We won't leave until they give up their weapons and those who killed us are tried," said the man, who gave his name as Mamduh.

The clashes were the worst since 13 people died in a brawl in March in another Cairo neighbourhood after Christians protested against an arson attack on a church.

The military has promised to come down hard on sectarian attacks, but Christians say that they have too often been left to fend for themselves.

Dozens held a protest outside the American embassy on Sunday demanding that the United States intervene on their behalf. Coptic Christians account for roughly 10 per cent of the country's 80 million people, and they have long complained of state sanctioned discrimination.

On New Year's Eve, a suicide bomber killed at least 20 people outside a church in Alexandria after a Coptic Mass.

Church leaders spoke out in support of Mr Mubarak, and the recent clashes will confirm the fears of many Christians that his overthrow might unleash powerful and sometimes violent Islamist forces.

Other Christians, particularly the young, joined in the protests against his rule, and claimed that he had himself covertly encouraged Islamic militancy in order to win support for his regime from America and the West.