U.N. Inaction on Myanmar
All Actions of the UN Human Rights System Critical of Specific States, 2007 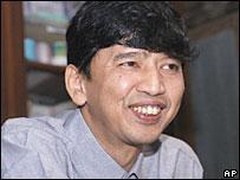 "Myanmar's military junta arrested 13 top dissidents and deployed gangs of spade-wielding supporters on the streets of Yangon on Wednesday to halt protests against soaring fuel prices and falling living standards.

Armed police also took up positions across the country's biggest city alongside truckloads of men from the army's feared Union Solidarity and Development Association (USDA). Many were carrying brooms and shovels, pretending to be road sweepers. Despite the clampdown and the overnight arrest of the prominent activists, 100 people staged an hour-long march before being dispersed. Five women and a man were arrested, although there was no violence, witnesses told Reuters.

"Onlookers applauded but failed to join the march," one said. In a rare announcement in all state-run newspapers, the junta said the 13 had been arrested for "agitation to cause civil unrest" and "undermining peace and security of the state," charges that could put them in jail for up to 20 years.

Government agents had taken papers and mobile phones, added Htay Kywe, who had managed to evade capture during a raid on his home and had gone into hiding, one of the exile groups said.

The swoop came ahead of a planned protest on Wednesday against last week's shock hikes in fuel prices, the latest in a rare series of demonstrations against deteriorating living conditions and galloping inflation in the former Burma.

The Washington-based U.S. Campaign for Burma said it feared for the safety of the detainees, especially Min Ko Naing, winner of U.S., Canadian and European human rights awards.

"Min Ko Naing and the other leaders arrested have all been severely tortured during previous incarcerations and we are gravely concerned for their immediate well-being," policy director Aung Din said in a statement.

Min Ko Naing's 88 Generation Students Group led a march on Sunday tapping into public anger at the 500 percent rise in the price of compressed natural gas -- a hike that came without warning and brought Yangon's bus networks to a standstill.

Myanmar has some of Asia's largest natural gas reserves and has just decided to export production of two major fields worth billions of dollars to China.

Min Ko Naing -- a Burmese nom de guerre meaning "conqueror of kings" -- was not linked to Wednesday's protest planned by Ko Htin Kyaw, an activist already arrested four times this year. The world's biggest rice exporter when it won independence from Britain in 1948, Myanmar is now one of Asia's poorest countries after 45 years of unbroken military rule.

Aung San Suu Kyi, 62, has been in prison or under house arrest for much of the past 17 years. Human rights groups and the United Nations say as many as 1,100 others are behind bars for their political beliefs."