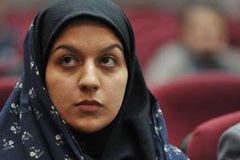 NCRI -Â The Women's Committee of the National Council of Resistance of Iran calls on all international bodies and human rights organizations, especially the UN Special Rapporteur on Extra-judicial, Summary or Arbitrary executions and the UN Special Rapporteur on the situation of human rights in Iran, as well as the bodies defending women's rights, to take urgent action to have the death sentence of Ms. Rayhaneh Jabbari revoked.

Ms. Rayhaneh Jabbari, 26, a decorator, was imprisoned seven years ago for using a weapon to defend herself against an agent of the Iranian regime's Ministry of Intelligence and Security.

Mrs Rayhaneh was forced to defend herself against the MOIS agent who attempted to assault her. The scuffle led to the death of the MOIS agent.

The henchmen of the clerical regime tortured Mrs Rayhaneh in attempts to extract a forced confession from her.

Ms. Sarvenaz Chitsaz, Chair of the Women's Committee of the National Council of Resistance, stated that young Iranian young women and girls suffer from institutionalized discrimination and oppression, are safe nowhere from the evils of the mullahs and their MOIS agents. The death sentence was passed on this young woman to intensify the atmosphere of terror in society, and in particular to frighten the girls and women who are determined not to succumb to heinous acts and oppression by this inhumane and misogynistic regime.