U.N. Inaction on Nigeria
All Actions of the UN Human Rights System Critical of Specific States, 2017 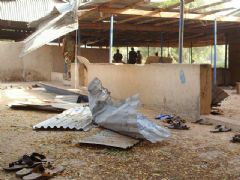 Scene of bombing at University of Maiduguri

Two children, suspected to be 7 and 12 years old and believed to be linked to the Islamic State (ISIS/ISIL) branch Boko Haram, reportedly carried out twin suicide bombings Monday that left at least five people dead and 15 others injured at the University of Maiduguri (UNIMAID) in the capital of northeastern Nigeria's Borno State.

Although the ISIS Nigeria-based branch has not officially claimed responsibility for the deadly attack on a mosque and another location within UNIMAID, authorities and some local news outlets note that the incident bears the hallmarks of Boko Haram's brutality.

"Several times, the Boko Haram terrorists have made attempts to attack the university, but the military repelled them," notes Nigeria's Daily Post.

The attack comes after Nigerian President Muhammadu Buhari claimed last month that his government had dealt the "final crushing of Boko Haram terrorists in their last enclave in Sambisa Forest," the group's primary stronghold that covers states parts of the northeastern states of Borno, Yobe, Gombe, Bauchi, and Kano.

However, Boko Haram-affiliated attacks have reportedly continued. The Nigerian government has repeatedly claimed in the past to have "totally" crushed the terrorist group.

The two allegedly Boko Haram-linked children blew themselves up at or near different gates of the university in Maiduguri, the capital of Borno state.

One of the explosions took place in a mosque near Gate 1, while the other occurred at Gate 5 of the university.

Citing Borno police spokesman Victor Isuku, Al Jazeera identifies one of the attackers as a girl believed to be 12 years old.

"The IED [improvised explosive device] strapped to her body exploded, killing her instantly," the spokesman said in a statement. "Shortly after that a second explosion occurred in a mosque inside the university."

Meanwhile, some Nigerian news outlets have identified the alleged 12-year-old as a boy, noting that Borno State police commissioner Damian Chukwu has said a "police officer instantly gunned him down and his bomb exploded and killed him instantly."

Chukwu reportedly added, "The second suicide bomber, a seven-year-old, detonated the second explosive at the senior staff quarters mosque in the university where a professor and four persons were killed and 15 persons sustained various degrees of injuries and were rushed to the hospital."

"This is the first time they [Boko Haram] succeeded in causing serious damage on the university and I believe, this is due to laxity on the part of the security in the university," an unidentified lecturer at the university told Daily Post.

Reporting from the Nigerian capital of Abuja, Al Jazeera's Ahmed Idris noted that violence may intensify as Boko Haram loses ground in its Sambisa Forest stronghold.

"The leader of the Boko Haram group faction, Abubakar Shekau, called on all his supporters to hit the Nigerian population as hard as possible through bombs, guns and even slash-and-burn," said the reporter.

While more than 20,000 people are believed to have been killed by Boko Haram since it began its insurgency in 2009, about 2 million have been displaced by the ISIS wing.