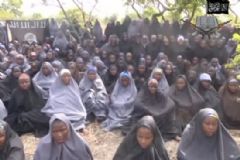 Nigeria Finds 10-Year-Old Girl With Bomb Strapped To Her

Nigerian forces have arrested two Boko Haram suspects who were traveling with a 10-year-old girl with explosives strapped to her, the government said on Wednesday.

Government spokesman Mike Omeri said the suspects had been intercepted in a Honda CRV car traveling along a road in the north's Katsina state.

"Ten-year old Hadiza was discovered to have been strapped with an explosive belt and, immediately, Iliya and Zainab made attempt to escape with the car, but were later blocked by other concerned Nigerians and subsequently arrested," he said.