U.N. Inaction on Nigeria
All Actions of the UN Human Rights System Critical of Specific States, 2013 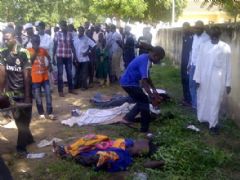 Islamic extremists attacked an agricultural college in the dead of night, gunning down dozens of students as they slept in dormitories and torching classrooms in an ongoing Islamic uprising in northeast Nigeria, the school's provost said.

Molima Idi Mato, provost of the Yobe State College of Agriculture told The Associated Press that as many as 50 students may have been killed in the attack that began at about 1 a.m. Sunday in rural Gujba. He said he could not give an exact toll as security forces are still recovering bodies.

The other 1,000 students enrolled have fled the college that is about 25 miles north of the scene of similar school attacks around Damaturu town, he said.

There were no security forces stationed at the college despite government assurances, said Mato. The state commission for education, Mohammmed Lamin, called a news conference two weeks ago urging all schools to reopen and promising protection from soldiers and police.

Most schools in the area closed after militants on July 6 killed 29 pupils and a teacher, burning some alive in their hostels, at Mamudo outside Damaturu.

Northeastern Nigeria is in a military state of emergency against an Islamic uprising prosecuted by Boko Haram militants who have killed more than 1,700 people since 2010 in their quest for an Islamic state. Boko Haram means Western education is forbidden.