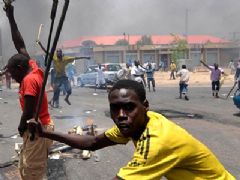 The World Watch List (WWL) Research team of Open Doors International has released a Top 10 Violence List of countries in which Christians have experienced the most violent incidents for their faith in Jesus Christ.

The World Watch Top 10 Violence List, which is based on persecution incidents between Nov. 1, 2012, and March 31, 2014, is topped by Nigeria. The others, in order, are: Syria, Egypt, Central African Republic (CAR), Mexico, Pakistan, Colombia, India, Kenya and Iraq. For a complete country summary of the Top 10 Violence List, go to https://www.opendoorsusa.org/downloads/pdf-downloads/violence-top-10-countries-2014.pdf.

In all countries where Christians are persecuted, researchers recorded 3,641 churches and Christian properties destroyed and 13,120 other forms of violence against Christians such as beatings, abductions, rapes, arrests and forced marriages.

Open Doors researchers also released information on the Top 10 Violence List in the category of faith-related killings during the 17-month reporting period. Nigeria was No. 1 with a total of 2,073 Christian martyrs. Nigeria is followed by Syria 1,479, CAR 1,115, Pakistan 228, Egypt 147, Kenya 85, Iraq 84, Myanmar (Burma) and Sudan 33 each and Venezuela 26.

Researchers say the total number of martyrs is "a very minimum count and could be significantly higher."

"The alarming increase of violence against Christians in Nigeria over the past months highlights the lack of religious freedom they have and the daily dangers they face from the Islamic terrorist group Boko Haram and other violent Islamic organizations," says Open Doors USA President/CEO Dr. David Curry. "Going to school, attending church or identifying yourself as a Christian is a very brave decision in Nigeria. It is turning into a bloodbath. Christians in the West must stand in the gap with our prayers and support."

Observers might be surprised to find North Korea, the 2014 World Watch List's No. 1 country as the worst persecutor of Christians, absent from the Top 10 Violence List.

"When it comes to counting the numbers of Christians martyred, it is impossible to get an accurate number for North Korea," says Jan Vermeer, Open Doors field worker for North Korea. "This is not because there are no Christians being killed for their faith. It is a fact that thousands of Christians are starved, abused and tortured in North Korean's extensive prison system. But due to an inability to derive sufficiently accurate figures about the reasons for killing Christians in this most secretive society, North Korea is excluded from the total number of killings."

Sources for the World Watch Top 10 Violence List include external media and Internet searches, as well as Open Doors Field Operations, which directly works among and with persecuted Christians.

"The list shows that violence against Christians for faith-related reasons is spread all over the globe âfrom India, to African and Middle Eastern countries, and to Latin America," says Frans Veerman, director of World Watch Research. "Islamic extremism, tribal antagonism and organized corruption are the main persecution engines fueling violence, with Islamic extremism being the major engine in seven of the top 10 countries."

Veerman adds: "Egypt is very high because of increased harassment and attacks by mobs and Islamist groups. Also, Latin America is well established in the Top 10. Mexico ranks No. 5, but is not ranked on the WWL, and Colombia No. 7. Latin America has always known high levels of corruption and state and insurgent violence. Christians are perpetually caught in the crossfire between tribes, guerrillas who are drug runners, landlords who are violent and soldiers running their own rackets."

The World Watch Top 10 Violence List is a continuation of the 2014 World Watch List (www.worldwatchlist.us), and thematically covers the violence portion of the World Watch List questionnaire. It also includes the World Watch List reporting period (November 2012-October 2013), but has been extended in order to include updated information. The top 10 countries on the WWL, in addition to top-ranked North Korea, are Somalia, Syria, Iraq, Afghanistan, Saudi Arabia, Maldives, Pakistan, Iran and Yemen. The WWL was released on Jan. 8. World Watch Research is the international research department for Open Doors International.