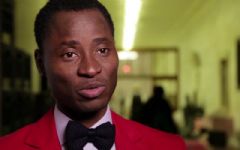 Nigerian-British LGBT Activist Bisi Alimi Has Been Tortured and Exiled â But Insists “I Am Not A Victim.”

"When my attackers came for me in 2007, they wanted to make me a victim. But I stand tall today... My name is Bisi Alimi, a Nigerian-born British citizen gay rights activist. And I am not a victim."

Bisi Alimi tells his incredible story in on the newest Quorum video. After coming out on Nigerian television, Alimi was beaten, tortured, and almost killed. He fled his country.

Yet, he refuses to be a victim.

"These narratives don't shape me," he says. "I want to own my own story." And, as you will see, those of straight allies who have helped LGBT Africans speak in their own voices and on their own terms; of bloggers and journalists and activists; of, as he puts it, lovers, friends, sisters, and brothers.

Contrary to myths of dependence and invisibility, Alimi-who has also written for The Daily Beast insists that LGBT Africans must embrace their own agency "to choose to fall, or to rise."