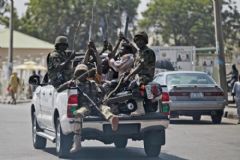 Soldiers and people carrying machetes ride on the back of a vehicle along a street in Gombe January 30, 2015. Reuters/Afolabi Sotunde

Community leaders and residents accused Nigerian troops of killing dozens of civilians and razing homes to avenge the deaths of six soldiers.

Traditional ruler chief Jessie Miri told reporters up to 80 people have been killed yesterday in multiple attacks by soldiers over the weekend in the Wase district of central Plateau state.

Spokesman Capt Ikwedichi Iweha denied the special task force attacked any civilians, asking why they would attack the very people they are supposed to protect.

But residents said the soldiers arrived in more than a dozen armored personnel carriers. Community leader Comrade Jangle Lohbut called a news conference in Plateau state capital, Jos, to say he had documented at least 38 deaths, including those of two police officers, members of the National Security and Civil Defense Corps and a member of a vigilante group. "Soldiers stormed some villages in Wase ... Villages belonging to Tarok and other tribes were razed and many lives, men, women and children, were lost." He said hundreds of people are homeless as a result.

Youth leader Shafi'i Sambo said the attacks on villagers, mainly of the Tarok tribe, follow the killings and mutilations of six soldiers by Tarok youths on Thursday. He said four soldiers still are missing in that attack.

Plateau state is riven by ethno-religious violence over land use between mainly Christian farmers and mainly Muslim semi-nomadic cattle herders that has killed thousands over the years.

Nigeria's military has been accused of many atrocities including the deaths of thousands of detainees in the northeastern Islamic uprising by Boko Haram.

In 2013, reports by The Associated Press and Amnesty International investigations found the military had killed more than 200 civilians and burned down thousands of homes in the northeast fishing community of Baga after a soldier was killed in the town.