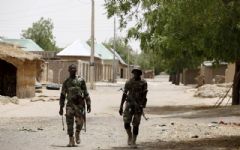 Nigeria’s Government Turns Its Back on Boko Haram Victims

CALABAR, Nigeria - Modupe Ozolua spends most of her time working with Internally Displaced Persons (IDPs) in northeastern Nigeria. She's seen a lot. But when she visited an IDP camp in Yola, Adamawa state, in April to distribute relief items to victims of the Boko Haram insurgency, she was shocked. Hundreds of women and children were preparing to leave. Nigerian officials were shutting down the camp.

"We couldn't believe it," said Ozolua, founder and president of the Body Enhancement Foundation, a Nigerian nonprofit organization that helps underprivileged Africans restore and rebuild their lives. "They [Nigerian authorities] don't really care where these people end up."

Most of Nigeria's over 1.5 million displaced persons are housed in overcrowded camps across the troubled northeast region under the supervision of the country's National Emergency Management Agency (NEMA), with additional aid in individual states from the State Emergency Management Agency (SEMA). The camps are mostly school facilities and empty government buildings, with little or no basic amenities, some without running water and electricity. IDPs sleep piled onto donated mattresses and feed their children with the meals provided by the government and donors.

The weeks ahead will be tougher still. The government has decided to close down IDP camps, particularly in Adamawa statewhere over 100,000 IDPs, including women and children rescued just recently from Boko Haram's stronghold in Sambisa forest, are taking refuge. When that happens, government aid will be cut off, and the displaced women with mouths to feed and no income source will have to provide for themselves and their children as best they can. Even worse, they will have to return to their ravaged communities, where they will live with few or no social services, and face the possibility of new threats from Boko Haram.

Although the government said the camps would not be officially closed until school and hospital facilities destroyed by Boko Haram in IDP home communities are repaired, some camps such as Gerie 1 in Yola with over 1,200 IDPs (including two who tested positive for HIV), have been told to move out because the school facilities being used now are needed for learning. NEMA and SEMA officials in Adamawa meanwhile claim that all but two areas in the state-Mitchika and Madagali-are free from the insurgents, and are safe for IDPs to return.

This widely criticized action by Nigerian authorities isn't new in any way. In February, the government shut down its official displacement camp in Gombe, where nearly 3,000 persons were taking refuge. The evicted IDPs were rumored to have been paid stipends either to return back home or rent a house wherever they desired. But not long after they were asked to leave their camp, IDPs complained that they were starving as they were yet to receive food items promised by government.

"These IDPs have not been provided the resources to survive outside these camps, and so many do not have anywhere to return to when the camps close," said Akor Jackson, an education campaigner based in Yola. "To be able to sustain themselves outside the camps, they need jobs and a place to live."

The Daily Beast learned that NEMA and SEMA officials in the region met with key stakeholders on April 27, where it was decided that a process will begin to close down camps in the northeast, and return IDPs to their communities. It was also decided at the meeting that on May 7, a committee would be appointed to go to the affected communities and assess damages done to government facilities, such as schools and hospitals, and ensure that the damaged government infrastructure are repaired. No time frame was stated for the repairs, and nothing seems to have been done since then. The IDPs are at a crossroads.

"I just returned from as far out as Michika, Borno State, and inquired from people there if any government officials have visited those areas and was told, no," said Ozolua, a Nigerian-American known for pioneering cosmetic surgery in West Africa. "The only recent sighting of any government officials was when NEMA visited Uba, Adamawa State, three months ago to give food items to the Nigerian army to assist them in distributing to the villagers."

It was also decided during the meeting that IDPs will be given food and relief items along with transportation money to return to their villages. The transportation allowance will take them only to the government headquarters in their respective local areas. On getting there, it will be the responsibility of the leader of the local government to transport the IDPs to their villages. But as convenient as this unpopular plan sounds for both NEMA and SEMA, none of the displaced are benefitting from it.

"IDPs are leaving without that [any support] because they are fed up wasting their lives away at the camps knowing there isn't any plan from the government to help them rebuild their lives," said Ozolua, who has been counseling displaced women in camps in Borno and Adamawa. "Regardless of how damaged their villages are, IDPs are willing to return home, live in whatever conditions they find their villages, take their chances with security and take advantage of the rainy season to start cultivating their farms so they can be self-sufficient again."

They are doing this even as Boko Haram has intensified attacks in the northeast.

"We know Boko Haram can attack our communities at any time, but we have nowhere else to go to," an IDP leaving a camp in Yola said. "It is better we return home and cultivate our farms to survive, rather than get sick here."

Some IDPs even said they've faced worse trauma in camp than in the hands of Boko Haram. Indeed, that could be true.

A recent report published by Nigeria's Calabar-based International Centre for Investigative Reporting (ICIR) alleged that hundreds of young girls have been trafficked from IDP camps, although most victims were from unregistered, makeshift camps established when official camps could no longer cope.

The report quoted an unnamed nurse as saying many children were brought to her hospital after being raped in the IDP camps, and also alleged refugees were being sold as unpaid domestic workers, raped repeatedly, and in some cases burned and wounded with knives.

Children have to fight for is survival. Despite increased humanitarian efforts, thousands are still without an education, and many more are struggling with regaining their childhood.

Ozolua and her organization have paid huge attention to displaced women and children in the northeast, providing sewing machines and fabric, as well as money to start small businesses to generate a source of income, and creating an uncommon access to education for children in IDP camp.

"A woman is considered a weakling, and Muslims are even more disadvantaged," she said. "We want to touch the life of the people that have given up hope. It's so unfair the way they've been ignored."