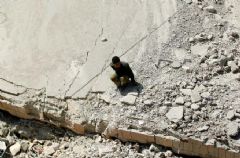 Yemeni rescuers search for victims under the rubble of the police headquarters after the building was struck overnight by Saudi-led air strikes on January 18, 2016 in the rebel-controlled Yemeni capital Sanaa. (AFP/Mohammed Huwais)

The Saudi military has conducted another combat sortie striking Yemen's southwest, where at least 10 civilians were killed.

Yemen's al-Masira television channel reported that the Tuesday airstrike left nine students and a women dead in an area in Ta'izz Province. Nearly ten others were also injured.

Meanwhile, Yemen's official Saba Net news agency said more than a dozen civilians were killed and five others wounded in similar attacks on homes in the town of Haydan, the northwestern province of Sa'ada.

Saudi warplanes also carried out airstrikes on two areas in the capital, Sana'a. In addition, the provinces of Ma'rib and Jawf were targeted by the Saudi warplanes.

Yemen has been under constant airstrikes by the Saudi warplanes since March 26, 2015. More than 7,500 people have been killed and over 14,000 others wounded ever since.

The Saudi military strikes have been meant to restore power to embattled president, Abd Rabbuh Mansur Hadi, who is a staunch ally of Riyadh. Yemeni army soldiers alongside fighters from popular committees have carried out retaliatory attacks against Saudi positions on the border region.