U.N. Inaction on Germany
All Actions of the UN Human Rights System Critical of Specific States, 2016 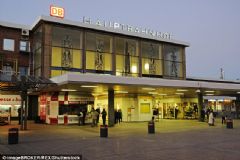 The train station where the stoning unfolded

According to a report on Friday on television station SAT1.NRW, the men attacked Yasmine und Elisa, two transgender women, near the city's main train station.

"Within seconds we were tossed around...and they took stones from a gravel bed on the corner and threw them at us," said Elisa.

A police car at the train station appeared as the stoning attack unfolded and arrested the men.

The German media as a general rule do not disclose the last names of victims to protect their privacy. The three men are between 16 and 18 years-old and are known to the authorities because of theft and assault arrests.

The Dortmund police official Kim-Ben Freigang said the suspects told the police that "such persons must be stoned." German media reported that one suspect said "You whores must be stoned." Yasmine installed a security camera at her residence where she lives with Elisa after the attacks. "That was barbaric what they did. They are barbarians," Yasmine said.

She added that she could not believe that such an act of shamelessness occurred. "In 2016, in Germany with stoning!" According to the SATI.NRW report, Yasmine said it was the first time in 30 years she felt unsafe as a transgender woman.

Stoning people to death is a penalty used in Muslim-majority countries.

In November, a criminal court in Iran's northern province of Gilan sentenced a woman to be executed by stoning for alleged complicity in the murder of her husband Arash Babaieepour Tabrizinejad.

The stoning penalty of the woman, who was only identified by the initials "A.Kh," was first reported on the Persian-language Iranian website LAHIG.

According to the LAHIG report, the court imposed the stoning penalty on the woman along with lashings and a 25-year prison sentence. The criminal court in the city of Rasht in Gilan issued the sentence.

Lethal homophobia is widespread in the Arab world and Iran. A 2008 British Wikileaks dispatch noted that the Islamic Republic of Iran executed "between 4,000 and 6,000 gays and lesbians" since the Islamic revolution in 1979.

The Islamic State in Syria and Iraq has murdered dozens of gays by tossing the men off buildings. Saudi Arabia, Sudan, Yemen and Qatar, to name just some of the most anti-gay countries, persecute LGBTs with the death penalty and imprisonment.