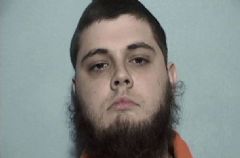 Ohio man indicted, accused of plotting attack on synagogue in support of ISIS

A Toledo-area man was indicted on federal charges Tuesday, following his arrest in December for what federal authorities said was a plan to carry out a mass shooting at a synagogue in the name of the Islamic State.

Damon Joseph, 21, of Holland is charged with attempting to provide material support to ISIS, attempting to commit a hate crime and possessing firearms in furtherance of a crime a violence.

The FBI arrested him Dec. 7 after he grabbed a duffel bag with two disabled semi-automatic rifles from the car of an undercover agent. Following his arrest, he detailed his plans for the attack and "his intent to cause mass casualties in support of ISIS," according to an affidavit written in December by FBI agent J. Troy Amundson.

Authorities have not named the synagogue Joseph targeted.

Joseph is in the custody of the U.S. Marshals Service.

The FBI said Joseph was radicalized and went by the name Abdullah Ali Yusef. He shared photographs of guns and knives on social media, as well a pictures originally distributed by ISIS's media arm, according to the affidavit. He also produced his own videos, authorities say.

The FBI became aware of his social media postings in May, and an undercover agent started talking with him in September, court filings show.

In October, following a mass shooting in Pittsburgh in which a gunman killed 11 people at the Tree of Life Synagogue, Joseph told the agent that "my opinion is the Jews are evil and they get what's coming to them," according to the affidavit.

"I don't feel bad at all considering what they're doing in Palestine," Joseph continued, according to the affidavit.

He said he admired the shooter and said he could see himself carrying out a similar attack, because authorities in Northwest Ohio "wouldn't even expect it," the affidavit said.

Joseph said over the next month that he wanted to commit an attack. He said he planned to escape after the attack, not die in martyrdom. He narrowed the target of his attack down to two area synagogues and said he would choose based on the number of people, the time and day, the affidavit said.

"Go big or go home," Joseph said, according to the affidavit.

Joseph continued to research the attack until his arrest on Dec. 7, according to the affidavit. He wrote down the name and address of the synagogue he planned to attack for an undercover agent and detailed how he wanted the attack to go down, officials said.

A message call left for Joseph's attorney was not immediately returned.

The news of Joseph's arrest, as well as the Pittsburgh mass shooting, were among the reasons the Anti-Defamation League, the Jewish Federation of Cleveland, the U.S. Attorney's Office and the FBI were set to host an event on Wednesday about safety in places of worship.