U.N. Inaction on Nigeria
All Actions of the UN Human Rights System Critical of Specific States, 2020 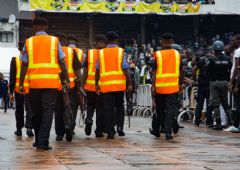 Outcry in Nigeria over footage of shooting by notorious police unit

Graphic footage showing officers from Nigeria's "Sars" police unit dragging two men from a hotel in Lagos and shooting one of them in the street has sparked mass fury across the country and fuelled long-held demands for reform.

In the disturbing footage taken by visitors at a hotel and posted on to social media on Saturday, armed officers of the Federal Special Anti Robbery Squad, commonly called Sars, can be seen dragging two limp bodies from the hotel compound into the street before one of the men is shot.

The video has sparked a deluge of footage and stories posted on to social media alleging recent atrocities and brutality by the notorious Sars unit, long accused of rampant abuses.

The unit, spread around the country, often operates in plainclothes, brandishing heavy weapons and setting up roadblocks for indiscriminate searches, fuelling widespread anger that they are often indistinguishable from armed criminals.

In one of videos posted on Twitter, onlookers accuse a squad of Sars officers of shooting a motorist and dumping him on the roadside, filming as the officers speed away from the scene with the victim's vehicle. In another video, a man standing seemingly unarmed against a parked bus is surrounded by Sars officers and gunned down.

In response to the outcry at a lack of accountability for police abuses, several government and police officials promised urgent reform.

Several public figures and celebrities, including the Afrobeats stars Wizkid and Davido, have condemned the killings, joining a prominent social media-led campaign to "end Sars", which has for years called for the unit to be dissolved.

On Sunday, Nigeria's inspector of police, Mohammed Adamu, banned Sars and other "tactical" police units focused on armed crimes from stop and searches, from setting up roadblocks and said officers would always be uniformed.

The governor of Lagos, Babajide Sanwo-Olu, promised "appropriate actions will be taken, and speedily too". According to the police, a dedicated complaints unit has in recent years improved accountability for police abuses.

However, a history of unmet promises for change has fuelled cynicism in Nigeria and a sense that the armed police units are beyond reproach.

In 2018 Nigeria's police chief ordered a re-organisation of Sars after similar public outrage after alleged abuses.

Sars was one of a number of special police forces set up in the 1990s to address rising violent crime, yet many in Nigeria have accused the unit of gradually mirroring the groups they were set up to stop.

The director of Amnesty International Nigeria, Osai Ojigho said that because of a lack of accountability, "horrific acts of impunity by Sars and similar tactical police units have continued unabated".

In June last year, a presidential panel established to address abuses by Sars submitted recommendations to President Muhammadu Buhari, which are yet to be implemented according to Amnesty International. The rights group has accused Sars officers of using "torture and other ill-treatment to execute, punish and extract information from suspects".