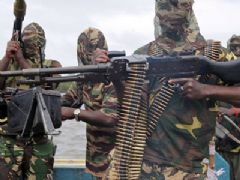 Heavily armed Boko Haram Islamists kidnapped more than 100 girls from a school in northeast Nigeria, sparking a search by soldiers to track down the attackers, a security source and witnesses said on Tuesday.

The unprecedented mass abduction in Borno state came hours after a bomb blast ripped through a crowded bus station on the outskirts of Abuja, killing 75 people, the deadliest attack ever in Nigeria's capital.

The violence underscored the serious threat the Islamists pose to Africa's most populous country, with the group capable of carrying out large-scale attacks in remote areas and massive bombings in major urban centres.

Gunmen stormed the Government Girls Secondary School in the Chibok area of Borno after sundown on Monday, torching several buildings before opening fire on soldiers and police who were guarding the school, witnesses said.

They ultimately overpowered the guards and entered the school, said Emmanuel Sam, an education officer based in Chibok who fled to the state capital Maiduguri after the attack.

The girls were then forced onto trucks and driven away by the attackers, multiple witnesses said.

A security source who requested anonymity said more than 100 girls were taken and blamed the attack on Boko Haram, a radical group whose name means "Western education is forbidden".

"We were able to follow the path of the truck and we found it broke down deep in the bush," the source told AFP.

"We are now trying to locate the whereabouts of the abducted girls," he added.

Some of the schoolgirls narrowly escaped their kidnappers by jumping off a truck in the middle of the night before running back to Chibok.

One of those who escaped said their opportunity to flee came when some of the gunmen became distracted after one of the vehicles in the convoy broke down.

"They tried to fix it," she told AFP by phone from Chibok on condition of anonymity. "It was at this moment that some of us jumped out of the vehicles and ran into the bush."

Boko Haram is blamed for killing thousands of people across north and central Nigeria since 2009 in an uprising aimed at creating a strict Islamic state in the north.

The group has carried out scores of school attacks, spraying gunfire on students in their sleep and bombing educational buildings across the north.

But a mass kidnapping specifically targeting girls is unprecedented in the group's rebellion.

Much of Boko Haram's recent violence has been concentrated in the northeast, the group's historic stronghold, where more than 1,500 people have been killed already this year.

The military, which launched a massive offensive in the region last year, had said it has confined the Islamists in the remote region, a claim discredited by Monday's mass bombing just a few kilometres from the seat of government.

"No serious analyst ever really believed" that the military had managed to trap Boko Haram in the northeast, said Alex Vines, head of the Africa programme at the London think-tank Chatham House.

The Abuja bombing "isn't a surprise", he told AFP. "It's just a reminder that the threat remains. It is completely consistent with what we know about Boko Haram."

The health ministry's casualty figures for the bombing include 75 dead with another 141 wounded, but spokesman Dan Nwomeh said the death toll may rise as more victims were identified -- a difficult task as their "bodies were totally dismembered".

Police in the capital have been put on "red alert," with security intensified "at all vulnerable targets," spokesman Frank Mba said.

Central Abuja, home to major hotels, foreign embassies and sprawling government complexes, has been mostly locked down for more than two years, with security reinforced after an August 2011 car bombing at the United Nations headquarters in the city, also blamed on Boko Haram.