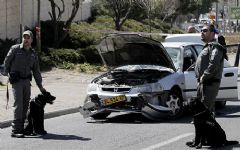 A driver ploughed his car into pedestrians in Jerusalem on Friday, injuring five people in an attack that further inflamed tensions a day after the Palestinians vowed to halt security co-ordination with Israel.

Israeli-Palestinian relations have been severely strained by last year's war in the Gaza Strip, violence in Jerusalem and moves by the Palestinian leadership to sue Israel for alleged war crimes.

The Palestinian threat to halt security co-ordination ramped up pressure on Israel ahead of a general election this month, although president Mahmud Abbas has pledged to negotiate with whomever the Israelis elect.

The car ramming on Friday bore the hallmarks of a series of "lone wolf" attacks by Palestinians in Jerusalem last year.

"A young man rammed his car (into pedestrians), and then got out and tried to stab people," police spokeswoman Luba Samri said in a statement.

Four Israeli border guards were among those injured in the attack outside a security forces' base on the line separating west from Arab east Jerusalem.

The driver was shot and seriously wounded by a security guard at the scene, according to police.

They said the suspect, in his 20s, was a resident of Arab east Jerusalem, which was annexed by Israel after it occupied the West Bank in 1967.

He was identified by relatives as Mohammed Salaymeh from the neighbourhood of Ras al-Amud.

Israel was shaken by a spate of attacks in the Holy City in October and November in which Palestinians ploughed vehicles into groups of pedestrians, killing several people.

On those occasions the attackers were shot dead at the scene.

The incidents triggered months of tensions, including violent protests, in east Jerusalem, which the Palestinians want as the capital of a future state.

Relations worsened in December when the Palestinians submitted a UN Security Council resolution â which was voted down â calling for an end to Israel's occupation of the West Bank within two years.

In January the Palestinians joined the International Criminal Court,where they plan to file a formal war crimes accusation against Israel in April, almost a year after the two sides broke off peace talks.

Israel has hit back by freezing tax revenue to Mr Abbas's Palestinian Authority, leaving the Palestinian administrative body unable to pay its workers.

On Thursday, the Palestine Liberation Organisation, which dominates the PA, announced it was ending security cooperation with Israel.

The co-ordination was launched under the 1993 Oslo peace accords which led to the creation of the PA.

It is considered crucial for Israel to monitor the Palestinian Islamist movement Hamas, which controls the Gaza Strip, and its West Bank members.

The halt to cooperation, if implemented, would force Israel to "take over full responsibility for the Palestinian people in the occupied State of Palestine, the West Bank, east Jerusalem and Gaza," the PLO said.

It gave no time frame for ending security co-ordination.

Mr Abbas, despite vowing to continue to press the Palestinian case through the UN, signalled he was willing to resume peace talks with whichever prime minister takes office after the March 17 election.

"We ask all countries of the world to recognise the state of Palestine," he said at the PLO conference on Wednesday.

"But we want to say to the Israeli side, these recognitions do not mean in any way that we do not want to negotiate, or that we're running away from negotiations."

"Whoever" wins the Israeli election, Mr Abbas said, "or whatever his politics ... we will deal with him."