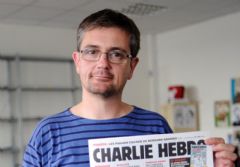 Charb, the top editor and a cartoonist for Charlie Hebdo, was killed Wednesday.

At least 12 were killed in a terrorist attack at a Paris newspaper known for taking satirical shots at the prophet Mohammed early Wednesday morning.

Among the killed were 10 newspaper staffers and two police officers, Fox News reported France President Francois Hollande is terming the attack - carried out by two men wearing masks and carting Kalashnikovs and a rocket launcher - an act of terror, Fox News reported.

Mr. Francois also said intelligence had thwarted and halted a number of terrorist plots in recent weeks, The Guardian reported.

His statement: "[France has experienced] an exceptional act of barbarism committed against a newspaper," The Guardian said. He added that Paris was in "shock" and vowed to "fight these threats" and "punish the attackers."

The city has gone on high alert, The Guardian reported.

Gunmen attacked the Paris offices of the Charlie Hebdo newspaper - the same publication that was firebombed years ago after printing a cartoon that poked fun at the Muslim prophet, Mohammed.

Benoit Bringer, a witness to Wednesday's attack, told a media outlet in France: "Two black-hooded men entered the building with Kalashnikovs. A few minutes later, we heard lots of shots."

National Review Online, meanwhile, reported tweets from witnesses, with one writing: "Several men in black cajoles were heard to shout 'the Prophet has been avenged.'"

The newspaper offices were firebombed in 2011 after publishing a satirical cartoon about Islam - and have not let up on their coverage of the faith.

As NRO reported: "Just this morning, it tweeted out the following cartoon, with Islamic State leader Abu Bakr al-Baghdadi wishing his audience the best for the new year."

NRO then posted the screenshot of Charlie Hebdo's black-and-white drawing of the religious leader standing at a microphone and issuing a brief statement.