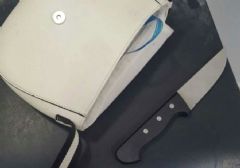 The blade used in the attack

A Border Police officer was stabbed and was lightly to moderately wounded on Sunday morning at Damascus Gate in Jerusalem. The suspect was shot and killed.

Magen David Adom said it treated the victim of the attack at the scene and evacuated him to Hadassah University Medical Center, in Jerusalem's Ein Kerem.

Police said that the attacker was a 38-year-old Palestinian resident of the West Bank who approached Haguy Street from the Damascus Gate in the direction of two Border Police officers who were patrolling in the area.

Just as the man passed the police officers, he pulled out his knife, screamed "Allahu Akbar" [God is great] and stabbed one of them in the neck, the police spokesperson said.

Police said the officers reacted quickly, shot the assailant, and after searching his body they found another knife.

Security forces arrested 15 Palestinian terrorism suspects - 11 of them suspected in taking part in unorganized attacks and riots - in West Bank raids overnight between Saturday and Sunday.

During a weapons raid in Hebron, soldiers from the Givati infantry brigade's Tzabar battalion seized an M-16 assault rifle, a handgun, and ammunition.

On Saturday, the IDF began to prepare to demolish the homes of three Palestinians, two of whom wounded eight soldiers in the West Bank on Friday.