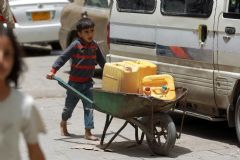 A Yemeni boy carries water containers in the old city of the capital Sanaa on April 7, 2015 (AFP Photo/Mohammed Huwais)

The Red Cross warned of a "catastrophic" situation in Yemen's main southern city Aden, as forces loyal to the president battled Iran-backed Shiite rebels in the streets.

The Huthi rebels and their allies made a new push on a port in the central Mualla district of the city, but were forced back by militia supporting President Abedrabbo Mansour Hadi, witnesses said.

Naval forces of the Saudi-led coalition, which has carried out nearly two weeks of air strikes in support of Hadi, shelled rebel positions across the city, the witnesses said, though the coalition denied launching a naval combat operation.

The situation in Aden was "catastrophic to say the least".

"The war in Aden is on every street, in every corner... Many are unable to escape," she said. General Ahmed Assiri, spokesman for the coalition, however, said many parts of the city remained "stable".

Doctors Without Borders (MSF) said the situation was "worsening by the day".

Medics in Aden had "not received large numbers of casualties over the past few days... due to the difficulties faced in trying to reach a hospital," said MSF's Marie-Elisabeth Ingres. MSF has a team of 140 local staff and eight expatriates at a hospital in Aden.

"Our priority is to find a way to send a supporting medical team," Ingres told AFP, adding a team was waiting in Djibouti "for a green light from the coalition".

Assiri said later that permits had been issued for a boat carrying aid and medics from Djibouti.

The Red Cross hopes to deliver to Sanaa on Wednesday 16 tonnes of medical aid on a plane loaded in Jordan. Another plane carrying twice as much could follow the next day.

Two students were killed and several others wounded Tuesday when a rocket hit a school near Al-Hamza military base in the southwestern Ibb province, an official said, adding it was unclear if the school was hit in an air strike or by Huthi artillery.

On Monday night, Saudi-led warplanes struck the rebel-held Al-Anad air base north of Aden, a general said, while to the east, Al-Qaeda's Yemen franchise sought to tighten its grip on Hadramawt province.

Loud explosions were heard as the jihadists attacked an army base in the provincial capital Mukalla, much of which they captured last week.

Meanwhile, 10 Huthis and three tribesmen were killed in Shabwa, according to tribal sources. Fighting in Aden left at least 10 people dead, adding to the 53 people killed in the previous 24 hours.

Nationwide, more than 540 people have died and 1,700 wounded since March 19, the World Health Organization said.

At least 74 children had been killed since the coalition strikes began on March 26 -- though the real figure is thought to be much higher -- and more than 100,000 displaced, according to the UN.

Observers have warned Al-Qaeda could exploit the fighting to expand its control following the withdrawal of US troops overseeing a longstanding drone war against it.

The US, which sees Al-Qaeda's Yemen franchise as its most dangerous, has "expedited weapons deliveries" in support of the Saudi-led coalition, said Deputy Secretary of State Antony Blinken.

The Gulf states are also pushing for UN sanctions to be imposed on Huthi leader Abdulmalik al-Huthi and ex-president Ali Abdullah Saleh's eldest son, Ahmed, adding them to a list of three others, including the former president, hit by a global travel ban and asset feeze in November.

The evacuation of foreigners continued with three Indian planes carrying 604 passengers, including some Yemenis, from Sanaa to Djibouti.

Islamabad said it would take its time deciding whether to accept a Saudi request to join the coalition, which so far consists of nine Arab -- mostly Sunni -- countries.

Pakistan's neighbour Iran -- the main Shiite power -- has strongly criticised the intervention and rejected accusations it is arming the rebels.

Prime Minister Nawaz Sharif said Pakistan was "not in a hurry" to decide and that diplomatic efforts were under way involving Turkey and Iran.

Turkish President Recep Tayyip Erdogan, who has expressed support for the coalition without providing military forces, held talks in Tehran on Tuesday.

Iranian Foreign Minister Mohammad Javad Zarif is expected in Islamabad on Wednesday. Pakistan faces a tricky dilemma, as it has long enjoyed close ties with Riyadh and has benefited hugely from the oil-rich kingdom's largesse.

But it has called for a negotiated solution, saying it does not want to take part in any conflict that would worsen sectarian divisions in the Muslim world.