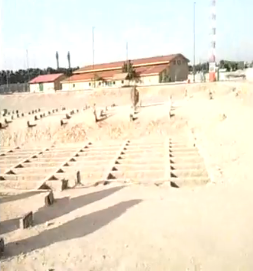 A reformist website "Norooznews" has reported that on July 12 and 15, 44 unidentified people who lost their lives in the postelection violence were buried in unidentified graves at the Behesht Zahra cemetery.

The website, which is close to Iran's largest pro-reform party Mosharekat, claims that it will release pictures and videos of the secret burial in the coming days and at an "appropriate time."

A reformist legislator, Majid Nasirpour, has said that the allegations should be investigated.

A conservative legislator, Hamid Reza Katouzian, has said the evidence about the reported secret burial should be submitted to parliament.

Another conservative legislator, Farhad Tajari, had dismissed the Norooznews report as a lie and said that the postelection arrests and clampdown was transparent.

The director of Behesht Zahra organization, Mahmud Rezaian, has told the semi-official Mehr news agency that the reported secret burial is just a rumor and that no unidentified corpses have been buried at the cemetery in recent days.

But Norooznews says that people can go and visit the graves, which are in the newer part of the cemetery located south of Tehran, and pay their respects to "the martyrs." According to the website the graves are at section 302 of the cemetery.

Iranian officials have said that about 30 people died in the postelection violence but the opposition believes the number of dead is much higher than the official toll. Some sources claim over 350 people were killed in the postelection crackdown. At least two people reportedly lost their lives as a result of torture in prison.