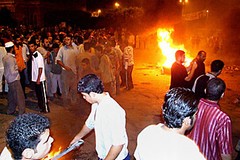 Demonstrators burned tires near the local headquarters of the ruling party in El Arish, Egypt, Sunday. The riots, sparked by fights between Bedouin tribes, targeted police and the government.
Source: Ashraf Sweilam/AP

"The regime of Egyptian President Hosni Mubarak is in the midst of one of its largest crackdowns against public dissent in a decade.

Seven journalists have been given prison sentences in recent weeks; more than a thousand activists of the Muslim Brotherhood, the country's most popular political opposition, languish in jail; and labor organizers involved in a wave of strikes at government-owned factories have been detained.

On Sunday, fighting between rival Bedouin clans in the Sinai Peninsula quickly spiraled into a riot targeting the police and President Mubarak's National Democratic Party (NDP). While local grievances sparked the fight, regular reports of widespread police brutality and torture fed anger in the Sinai, where locals called for the police chief's resignation, and are fueling public outrage around the country. As the government cracks down hard in both the Sinai and on opposition activists, such as members of the Muslim Brotherhood, it is increasingly being charged with the use of torture on detainees. The charges are being publicized on the Internet by activists eager to bring about reform in Egypt, where the government has strong support from Washington.

"It's hard to explain why, except that torture becomes a habit," says Aida Seif al-Dawla, a psychologist who founded and runs the Nadim Center for the Psychological Rehabilitation of Victims of Violence in Cairo. "But there's no question that police abuse has gone through the roof. For the past month, we've been getting one or two cases every day. For every case that's reported to us, there's bound to be many more we never hear about."

A plumber who was on his way home in late July after finishing a job in the poor town of Amrania on the western edge of Cairo, Mr. Gadallah was waylaid by a group of local cops.

He was beaten and his cellphone and payment for his work were stolen, says his brother, Ghad. Then, his brother says, Gadallah insisted on filing a complaint at the police station where some of his attackers, whom he recognized, worked.

He was rebuffed and warned against pursuing the matter further. But, says Ghad, Nasser didn't heed those warnings. He filed a complaint with the prosecutor of Giza Governorate, which was backed up by the testimony of a witness who identified some of the police.

On Aug. 8, about 10 officers from the Amraniyah police station broke into the family's home, tied up Ghad and another brother of Nasser's, and tossed Nasser headfirst to his death from the family's third-story balcony while his 9-year-old son and his wife watched, according to a recounting of the incident by Ghad.

The family's neighbors quickly gathered to attack the police, smashing the windows of some of their cars before the police were able to flee.

Now, says Ghad, the other witness to the initial robbery says he's afraid to testify. The prosecutor in Giza hasn't yet decided if charges will be pressed over Gadallah's death, and some of his brother's alleged killers continue to work openly at the police station, according to Ghad.

"Obviously, most Egyptians are afraid to speak out against things like this," says Ghad. "But for us, nothing will satisfy us but justice. People need to know that the police act like a mafia run out of the interior ministry."

Today, his sister-in-law and her 9-year-old son spend a few days a week with Nadim Center therapists trying to work through the trauma. On a typical day there, the waiting room is full of patients, about half Egyptians, the rest refugees from Sudan and other parts of Africa who suffered abuse home before fleeing to Cairo.

The Egyptian government says police abuse and torture here are isolated incidents and that the guilty are prosecuted. In an interview with a local newspaper earlier this year, Gen. Ahmed Dia el-Din, an assistant to the interior minister, accused the media of sensationalizing police abuses to stir up opposition to the government.

Those words have been followed in recent months by efforts to silence those who complain. In September, the government closed the Association for Human Rights and Legal Aid after it helped bring a case against the government over a political activist, Mohammed al-Sayyed, who died in police custody.

"Is police torture a bigger problem today? There's no question," says Gasser Abdel Razek, the director of regional relations for Human Rights Watch. "Fifteen years ago, we used to say that this or that police station is bad, or if that you were an Islamist and you got picked up after a bombing, you could count on being tortured. Today, I can't name a single police station that's good. And the victims are middle-class, they're educated, they're homeless. It doesn't make any difference."

One case that caused particular shock and revolution was the death of a 13-year-old boy, Mamduh Abdel Aziz, after he was taken into police custody in August in the delta town of Mansoura. He was charged with theft. The boy died in hospital, four days after he was beaten while in police custody. Before his death, the nearly comatose boy was shown on a video posted to Youtube.com with extensive burn wounds in his genital area. The boy's mother, Saieda Sourour, has told local newspapers that government officials offered her money in exchange for her promising to keep silent about the case. The Interior Ministry, in a written response to the furor, said an autopsy showed the boy died of an infection and said the evidence of torture was simply "allegations."

Mr. Razek, like many Egyptian human rights activists, says the spread of torture was a natural consequence of the government's use of violent interrogations against alleged Islamist militants in the 1980s. What became standard doctrine for the country's antiterrorist police units spread throughout the system as officers shifted to other jobs in the police force. "It became a culture. We have two generations of police who were brought up to use torture against Islamists. But if it's allowed and seen as effective, it spreads," says Razek. Razek says there has only been one successful torture prosecution of a police officer in Egypt this year, and argues that police violence is systemic, not isolated.

"We've seen dissent spreading beyond those who are politically organized, for instance, the labor unrest; so the regime feels it needs to make its people afraid to control its fate," he says. "I'm not talking people agitating for democracy, but people who are worried about feeding themselves."

Meanwhile, Ghad, whose brother was murdered in Amrania, says his family will continue to demand a prosecution. "The worst has happened. I don't even have the energy to be afraid anymore."