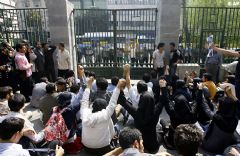 The foreign-based International Campaign for Human Rights in Iran says "scores" of students from universities across the country have been arrested and prosecuted in recent days.

It says that in some cases, students were arrested or prosecuted for attending protests on November 4. More than 100 people were arrested during rallies in Tehran that day, when opposition supporters staged demonstrations to coincide with a government-sponsored rally outside the closed U.S. Embassy.

The rights group says some students have been subjected to university disciplinary procedures, while others have been sentenced to prison terms and lashings.

There has been no reaction from the Iranian government to the report.

The National Council of Resistance of Iran also reported student arrests. That organization, which calls itself the "parliament in exile," called on the United Nations High Commissioner for Human Rights to condemn the arrests and the increasing pressure on Iranian students.

Thousands of people were arrested in a crackdown on protests that erupted after the disputed re-election of President Mahmoud Ahmadinejad. Most have been freed, but more than 100 leading activists were put on trial on charges of inciting unrest and plotting to overthrow the government.