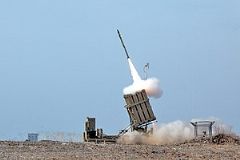 Rocket fire on Israel directed by Iran and Syria

The IDF has accused Iran and Syria of directing the Palestinian Islamic Jihad's rocket fire at Israel on Friday night and Saturday morning.

"The direction for what happened tonight in the Gaza Strip came from Damascus. We view the regime in Syria and the Iranian Quds Force as responsible for the incidents," the IDF Spokesman's Office said.

"We sent clear messages in this spirit to those who need it: that no one is immune, not in the strip or outside it," the IDF added.

The threats toward Iranian forces in Syria added a new dimension to what was already the heaviest fighting between Israel and Gaza terrorists in several weeks. Opening a new front in Syria could put Israel in open confrontation with heavily armed Iranian and Hezbollah forces, along with recently deployed Russian anti-aircraft systems.

"We have seen and established a clear link between Gaza and Damascus," said Lt. Col. Jonathan Conricus, an IDF spokesman.

"We know that the orders incentives were given from Damascus with the clear involvement of the Iranian Revolutionary Guard Quds Force. From our perspective, part of the address by which we will deal with this fire is also in Damascus and the Quds Force. Our response is not limited geographically," he added.

According to the IDF Spokesperson's Office, "the IDF's main objectives includes fighting against Iranian entrenchment in Syria, preventing the transfer of advanced weaponry to Hezbollah and maintaining the security for the residents of the south and Judea and Samaria."

The IDF also said that "our expectation, after a large shipment of humanitarian aid entered Gaza this week, was that Friday would look completely different. Hamas is tested on results, not effort. We accomplished our mission Friday-no mass crossing through the fence was carried out."

"Hamas bears responsibility for everything happening in and out of the Gaza Strip, and it will bear the consequences for the terrorist acts carried out against Israeli citizens," the military continued.

"The IDF will act with great force against terrorist attacks of any kind from the Gaza Strip and gravely sees the terror activity being led by the organizations. IDF is prepared for a variety of scenarios and is determined to continue its mission to protect the citizens of Israel," the statement continued.

Conricus said there had been no signs of Hamas trying to rein in Islamic Jihad.

The IAF struck dozens of terror sites across the Gaza Strip in response to nearly 40 rockets launched into Israel from Gaza. One of the targets destroyed was a building that served as Hamas' general security headquarters in Gaza's al-Daraj neighborhood.

On Saturday morning, IAF aircraft bombed eight Islamic Jihad targets in response to early morning rockets. The targets included three military sites, including sites for the manufacture of weapons in the northern Gaza Strip and a tunnel-manufacturing facility in the southern Gaza Strip.

Out of the 39 rockets launched into Israel, the Iron Dome missile defense system intercepted 17. Two rockets landed inside the Gaza Strip and the rest landed in open areas in Israel. This was the heaviest barrage of rockets since early August, when 150 rockets were fired in two days.

Following the escalation in the south, Defense Minister Avigdor Lieberman held security consultations with IDF Chief of Staff Gadi Eisenkot and senior IDF and defense officials at the Kirya base in Tel Aviv.

The military wing of Islamic Jihad threatened Saturday morning to escalate the rocket fire. "We are considering increasing the scope and quality of the response if Israel continues its violence and aggression," Islamic Jihad said.