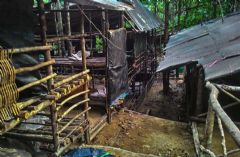 An abandoned migrant detention camp used by people-smugglers is seen in a jungle near the Malaysia-Thailand border, in Genting Perah (AFP Photo)

Muslim Rohingya women who were held at human-trafficking camps in Thailand and Malaysia were subjected to gang rapes by their captors, assaults that left at least two of them pregnant, a Malaysian media report said.

Malaysia's state-run Bernama news agency quoted a Rohingya survivor of the camps, Nur Khaidha Abdul Shukur, as saying young women would be taken away nightly from the jungle post where she was held near Padang Besar in Thailand.

She passed through the camp last year, according to the report released late Monday. "Every night, two or three young and pretty Rohingya women were taken out from the detention pens by the guards to a clandestine place," she was quoted saying.

"They would be gang raped by the guards. Two young women at the camp became pregnant after the gang rape."

The report also quoted her husband Nurul Amin Nobi Hussein saying he witnessed similar crimes taking place at nearby camps on the Malaysian side of the border.

The discovery last month of human-trafficking camps -- and scores of nearby graves -- first in Thailand and then over the border in Malaysia has caused shock and revulsion in Southeast Asia.

Seven camps were uncovered in Thailand beginning in early May and 33 bodies found in mass graves.

In late May, Malaysian police announced they had found 28 camps on their side of the border and 139 graves, which are still being exhumed.

The camps are believed to have been used by people-smuggling syndicates who move large numbers of impoverished Rohingya out of Myanmar, where they face systematic repression, with most heading for Malaysia.

Speaking from the northern Malaysian town of Alor Setarm, Nur Khaidha told Bernama that she entered the country illegally late last year after paying the smugglers to release her from the camp.

She said women sometimes were taken away by guards for several days to be used as sex slaves. Her husband, who said he transited the Malaysian camps earlier in 2014, told Bernama the same occurred there.

"In the night, several of the guards would go to the pens housing the women and take them to a nearby place," he said.

"We heard the shrieks and cries of the women because the place they raped them was very close to our pens, but as the incidents were at night, we could not see what was happening." AFP was not immediately able to confirm the claims with authorities.

Thai police have arrested nearly 50 people, including some local officials, since launching a crackdown in early May.

Malaysia has said 12 of its police officers are among those being investigated for possible involvement in the camps on its side.

The Thai crackdown threw the human flow into disarray, causing a humanitarian crisis by trapping thousands of starving migrants on boats at sea.

US Assistant Secretary of State Anne Richard, who is on a tour through the region to address the migrant issue, told reporters late Monday that she had met some women boat people now in Malaysia and many had endured harrowing experiences.

"It was very clear to me... they had gone through terrible, terrible experiences. They are not in good shape," she said.