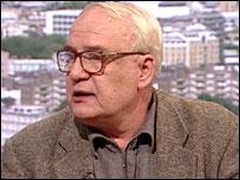 Vladimir Bukovsky, a Soviet dissident who was forcibly committed to psychiatric clinics in the 1960s - a practice still being used against dissidents in Russia today.
Source: BBC News

"Soviet doctors once joked that the best way to get thrown into a psychiatric hospital was to send a telegram to Leonid Brezhnev that was critical of the Russian leader. Now that old gallows humor might have to be resurrected. Doctors and Kremlin critics say over the past year at least 10 journalists, political activists or critics of local authorities have been wrongfully hospitalized in mental hospitals. And though forcible psychiatric treatment for political reasons is still rare, the Independent Psychiatric Association, a Moscow watchdog, says Russia's mental hospitals are routinely used by unscrupulous relatives and criminals to remove inconvenient family members for financial gain. "We see cases of psychiatrists taking bribes and faking diagnoses all the time," says Gennady Gudkov, a member of the Duma's Security Committee.

In some cases, hospitalization is seen as a way to resolve real-estate disputes or family quarrels. In two current criminal cases, doctors in Nizhniy Novgorod and Ulyanovsk are on trial, accused of committing old people to psychiatric institutions and selling their apartments for personal profit. (One defendant has pleaded guilty; the other says patients consented to the sale of their properties.) But increasingly, it is critics of authority who find themselves sent off to state hospitals. Yuri Savenko, head of the Independent Psychiatric Association, says he hears of new political cases almost every day. The most high-profile thus far involves Larisa Arap, a 48-year-old journalist in Apatity, near Murmansk, who had given an interview to a local newspaper in June that was highly critical of the region's state psychiatric hospitals. Arap was also an activist with the local branch of United Civil Front, a Kremlin opposition movement. In early July, she went to the hospital for a routine check-up required by law to renew her driving license. But, as she recalls, someone in the hospital called the police, and by evening, she had been committed to a psychiatric hospital, stripped of her clothes, tied to a bed and sedated. "Doctors told me that I would experience all the practices I had complained about in the papers," Arap told NEWSWEEK while still in the hospital. "They also told me that I was locked up for life." The hospital's head doctor, Yevgeny Zenin, told NEWSWEEK, "We do not care what independent commissions of psychiatrists, or the United Nations, or even aliens tell us. Once we decide to keep a patient here, we will. The courts will always listen to us and no one else." Yet Arap was lucky-the United Civil Front brought the case to the international media, and complained to Russia's human-rights ombudsman. He sent a delegation to Apatity to review her case, and they found Arap to be mentally fit. She was released last week. But other cases are still ongoing. Andrey Novikov, a journalist with a newspaper in Rybinsk, in central Russia, was jailed earlier this year on charges of "extremism" after publicly criticizing Vladimir Putin's policies in Chechnya. In February, Novikov was sent for involuntary psychiatric treatment for what his doctors say in court papers would be "as long as it takes to have his mental health fully restored."

Another journalist, Pavel Kuznetsov, was declared "mentally unsound" in February after criticizing local authorities' inefficiency in the newspaper. Olga Popova, a 34-year-old engineer, landed in Moscow's Mental Hospital Number 13 after seeing Duma Deputy Svetlana Savitskaya in June to complain about alleged abuses at Moscow's Serbsky Institute of Social and Forensic Psychiatry. Savitskaya told NEWSWEEK she believed her visitor to be "insane." She called the police to remove Popova from her office and wrote a note saying that in her opinion Popova was mentally unstable, on the basis of which she was committed. Three doctors from the Independent Psychiatric Association who have campaigned or her release examined Popova and found "no reasons for involuntary hospitalization." Popova is currently appealing her hospitalization through the courts.

For old dissidents like Vladimir Bukovsky, who was forcibly committed to a psychiatric clinic in the 1960s, these stories bring back chilling memories. "Once you are admitted to a mental hospital," he says, "any attempt you make to criticize the system or treatment will be evaluated as a sign or even proof of insanity." In modern Russia, it seems, as in the Soviet Union, you'd almost have to be mad to speak out."