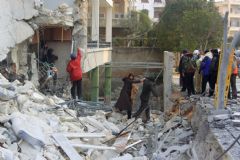 A man helps a woman making her way through the rubble of a damaged building after what activists said were airstrikes carried out by the Russian air force in Idlib, Syria, on Sunday. (Ammar Abdullah/Reuters)

Russian Airstrikes in Syria Blamed for Scores of Civilian Deaths

The attacks coincided with the release of a report by Human Rights Watch that accuses Russia and the Syrian government of using cluster bombs - indiscriminate, scattershot munitions - that have killed dozens of civilians in Syria in recent weeks.

As many as nine airstrikes struck the rebel-held city of Idlib on Sunday morning, killing at least 36 civilians and insurgents, said Rami Abdurrahman, who heads the Britain-based Syrian Observatory for Human Rights. The warplanes hit a courthouse and an intelligence building used by opposition groups in the area, said Abdurrahman, whose monitoring group relies on activists inside Syria.

Russia, an important ally of Syrian President Bashar al-Assad, has been carrying out airstrikes in Syria against opposition groups since late September.

"The courthouse was full of civilians," Abdurrahman said. "The Russians have been hitting everything, killing civilians and striking whatever they want."

The attacks could complicate perhaps the most serious diplomatic process to date for ending the Syrian conflict, which has killed more than 250,000 people, displaced millions and empowered extremist groups such as the Islamic State.

In a rare show of unity Friday, the Security Council unanimously approved a resolution endorsing peace talks between Syria's government and Assad's foes.

Initiated in Vienna in October, the proposed peace process has received backing from opponents of Assad, including the United States, and his primary allies, Russia and Iran. It calls for drafting a new constitution and for holding elections within 18 months, but it does not address the thorny issue of what to do with Assad during the transition process.

In video purporting to show the aftermath of Sunday's suspected Russian air raids, blood-soaked bodies lie crushed under layers of concrete and rebar.

A media activist, speaking in English, is shown in one video at the apparent scene of an attack saying that the target "was a courthouse and not a military installation."

That video shows women wearing bloodied headscarves and older men covered in dust. It then transitions to a man, apparently a civil defense worker, who is holding a baby he says was killed in the attack.

Speaking to the Reuters news agency, Yasser Hammo, a civil defense worker in Idlib, said at least 43 people were killed in the attacks Sunday.

"There are a lot of corpses under the rubble," Hammo said, suggesting the toll could climb much higher.

A coalition of Islamist opposition groups that includes Syria's al-Qaeda affiliate seized control of Idlib province this year, spurring Russia to intervene to shore up its ally.

In its report, Human Rights Watch documented at least 20 instances of Russian and Syrian government forces using cluster bombs, including two attacks that struck a camp for displaced people. The report says that the munitions used since the Russian military campaign began were "manufactured in the former Soviet Union or Russia."

"Civilians are paying the price of the Syrian-Russian offensive's use of cluster munitions, with their lives and limbs," Ole Solvang, HRW's deputy emergencies director, said in the report.