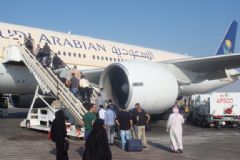 The rift between the federal government and Saudi Arabia has prompted the country's state airline to suspend operations in Canada.

Saudi Airlines issued a tweet early Tuesday saying flights to and from Canada would be suspended starting August 13.

Saudi Arabia operates at least two routes to the country, both of which depart from Toronto. Transport Canada did not immediately respond to request for comment on the decision.