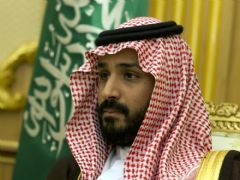 Saudi Arabia has already executed 82 people this year and is on course to behead twice as many prisoners as it did in 2015, according to new statistics compiled by a leading human rights organisation likely to raise fresh concerns about the UK's close ties to the Kingdom.

The British Government has been urged to do more to put pressure on its Gulf allies to halt the bloodshed in light of the figures, which would see the total death toll in Saudi Arabia reach a record high of more than 320 by the end of the year if the current rate is maintained.

This would be more than double the 158 executions carried out by the Kingdom last year, which was in itself a dramatic rise on the 88 people it beheaded in 2014. The figures were compiled by the UK organisation Reprieve using a combination of official statements from the Saudi government and reliable local media reports.

During his trip Mr Fallon also met Saudi defence minister Mohammed bin Salman bin Abdul Aziz and other members of the Saudi Royal family. The Ministry of Defence (MoD) said he had "reiterated the importance of working together to deal with global threats, including countering the poisonous ideology of Daesh and regional instability".

However, it did not say whether Mr Fallon had raised the subject of executions with the interior minister. Human rights groups are increasingly concerned about the fates of Ali al Nimr, Dawoud al Marhoon and Abdullah al Zaher, who have all been sentenced to death by the Saudis despite being children at the time of their alleged crimes. All three were convicted for alleged offences connected to protests calling for reform in the Kingdom and could be executed at any time without warning.

"As Saudi Arabia looks set for yet another record breaking year of beheadings, it is more important than ever that its allies in the UK, Europe and the US call for it to stop," said Harriet McCulloch, deputy director of the death penalty team at Reprieve.

"The deep injustices of the Saudi system mean that those being sent to the swordsman's blade are in many cases tortured into 'confessing', guilty of nothing more than calling peacefully for reform, or even sentenced to death as children. The UK and US must immediately call for Ali, Dawoud and Abdullah's sentences to be commuted before it is too late â given the rising tide of beheadings, vague reassurances are not enough."

A Government spokesperson said: "The Defence Secretary visited Saudi Arabia to discuss a range of regional issues. The UK is opposed to the death penalty in all circumstances and we make our views well known to Saudi Arabia. We have raised these particular cases at the highest levels and will continue to do so. Our expectation remains that the three individuals will not be executed."